This is a WWIB battle of epic proportions. Six leading ladies from all corners of the globe have fallen for the hypnotic charms of this Salvatore Ferragamo Fall 2011 houndstooth dress. The long sleeved black and white wrap dress has a deep plunge neck and slight front slit. I usually love houndstooth print, but this is getting a bit much...

1. Australian actress Teresa Palmer wore the dress first on 28 June 2011, while attending Salvatore Ferragamo's Resort 2012 presentation. She paired it with a box clutch, embellished belt and black heels by Ferragamo. Teresa kept her hair straight, with natural makeup.
2. Fashion-frenzied Lady Gaga wore houndstooth from hat-to-heel for an appearance on 'The View' on 1 August. Her hat, outlandish sunglasses, clutch bag and pumps were all in sync with her Ferragamo dress. She added strings of pearls for more drama.
3. Chinese actress Fan Bing Bing wore the dress next, within the same week as Gaga. She opted to wear the dress to the Ferragamo 'Attimo' fragrance launch in Beijing. Fan accessorized with black platform heels and a black sling bag. She added an air of mystique with a black netted hat. Her jet black locks were ironed out, her makeup almost theatrical.
4. Australian model Jessica Hart took her Ferragamo frock out on the town during Fashion's Night Out in New York on 8 September. Jessica accompanied her look with a statement bejeweled choker, black clutch and pointy-toe Ferragamo heels. Her hair was up in a high bun.
5. Vogue Japan editor Anna Dello Russo wore the dress during Milan Fashion Week in late September. She tossed on a flamboyant feathered hat, garnished with a large pink rose. At 48, she wears this dress as well as the younger dames. I like the two-tone heels with it. She carries the same Ferragamo houndstooth clutch as Lady Gaga.
6. Kim Kardashian is never one to miss out on a trend. She wore the wrap dress last week, on 7 October, for a television interview in New York City. This is the simplest from all the looks, as Kim chose neutral black accessories and wore her hair in a slicked black ponytail. The bold red lipstick is a great addition. 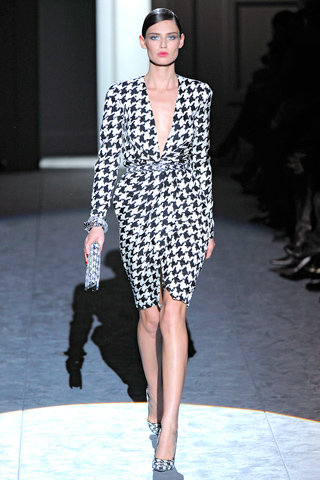 The dress as shown on the runway, worn by Italian model Bianca Balti
As for 'Who Wore it Best', this is a tough one. I like the fit on Anna, along with her black and white heels. But I prefer it with simple hair and styling like Kim's. What are your thoughts?
Posted by Sam

I'd go with Jessica Hart. Her and Kim wore it in a similar, clean, no fuss way, but I think it overwhelms Kim's petite curvy frame.

I kind of really love the way Ga Ga wore it! Especially how she put her own twist on it with the sunglasses and hat! it looks like it was made for her!

I DIE over hounds tooth print. It is seriously one of my favourite's and I wish I owned more of it.

Thanks so much for stopping by and leaving me with your kind words. Are we following each other yet ? Because I'd love too!

I love the simple styling too because of the patterns.... Happy Wednesday xx

Jessica and Teresa for sure! The dress is very striking, and I like it that they have kept it subtle.

wow I think it's too much print hehe but Lady Gaga took it to the tip hehe have you seen this Gaga's outfit? Kisses and have a great day;) I follow:D
Olaya b
ladyinboho.blogspot.com

so nice and elegant!
http://cookieswardrobe.blogspot.com/

KK all the way!
Gorgeous dress!

Jessica Hart is my vote! Love this post and that dress!

I love the Fan Bing Bing. Kisses from Brazil ~.~

Hi dear!!
Uuuuh, i really love that print!And your blog!
Thx u so much for the comment left on my post, I really appreciated it!
Follow each other blog? :)
Kisses

I love ADR and Kim Kardashian, Lady Gaga was a bit OTT for my liking.

I like Fan Bing Bing's take on the houndstooth dress. I like how she kept her outfit monochromatic and kept the drama on her make-up.

I think it looks super sexy on Jessica Hart!! I'm your newest follower by the way! :)

such a cool post! thanks for sharing:) btw. thanks for commenting on my blog:) i think lady gaga wore it best:) i'm following you now, if you like, follow me too.

I like the way the model is wearing it! the clutch the shoes it's all perfection to me!

Hi!! Thanks for your coment, I think that your blog is amazin too! And I think that Jessica Hart!!!
xoCharlie

hello! this post is fabulous! have you seen mine? there are new posts outfit, with the must have of this winter 2012. come and see, so tell my what you think! And if you like it, you could follow me! ;-)
Kisses
Miriamstella (from Italy)

I would wear it as Jessica Hart did, but if I also had a chance for some party I`d go for Anna Dello Russo as well:)
great blog, thanks for your comment and i`m your new follower, hope you might follow back:)

I like the pearls that Lady Gaga wore with. It would have been great if Jessica or Kim would have done that with two tones shoes. And keeping the black clutch. It just gets lost if its the same pattern. I think I would have liked a little more pop of color though. The hat was just too much with this dress.

i think Fan Bing Bing and the runway model herself. hahaha :P

I think it looks great on Jessica Heart.;)

the dresses are awesome and attractive.. loved it thanks for sharing!!
Pakistani Dress Collection

I think my favourite one is Teresa Palmer´s! The dress is fabulous in itself, it doesn´t need much. I´m following you on bloglovin now! I´d be a happy bunny if you followed me through google connect as well :)