Celebrities should know by now that Awards Season is the one time of year when they will be photographed the most and in the public eye. So wearing the same outfit as any other starlet during this short space of time should be carefully avoided. But on occasions when they don't, we have posts like these. 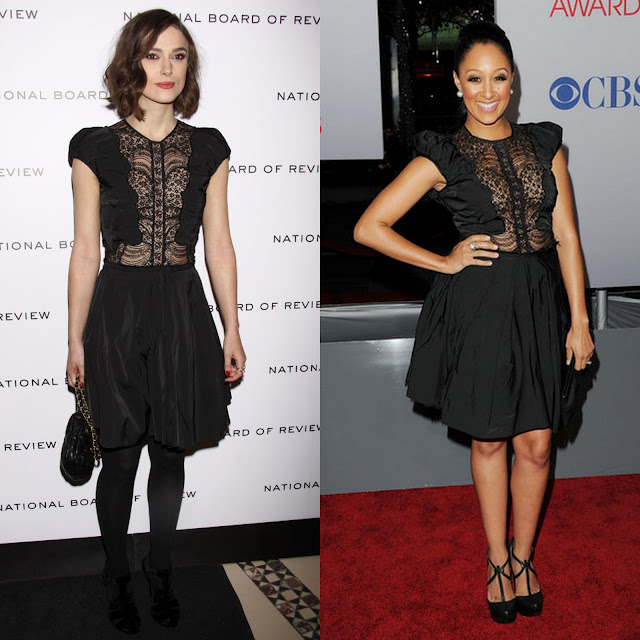 Left: British beauty Keira Knightley wore this black taffeta and lace Nina Ricci dress to the 'National Board of Review Awards' in New York on 10 January 2012. The dress has a sheer lace paneled bodice with ruched sides. Keira paired it with black tights, black Roger Vivier heels and a quilted black Chanel bag. She kept her hair in waves and wore a reddish lip colour and bright red nails.
Right: Tamara Mowry (from 90's sitcom Sister Sister) wore the dress just a day after Keira at the 'People's Choice Awards' on 11 January. She teamed the flirty black Resort 2012 dress with multi-strap black shoes. Tamara had her hair pulled back and wore large pearl earrings.

My Verdict: I prefer this dress on petite-framed Keira, and because she wore it with matching tights and heels, it gives the look more of a solidity. 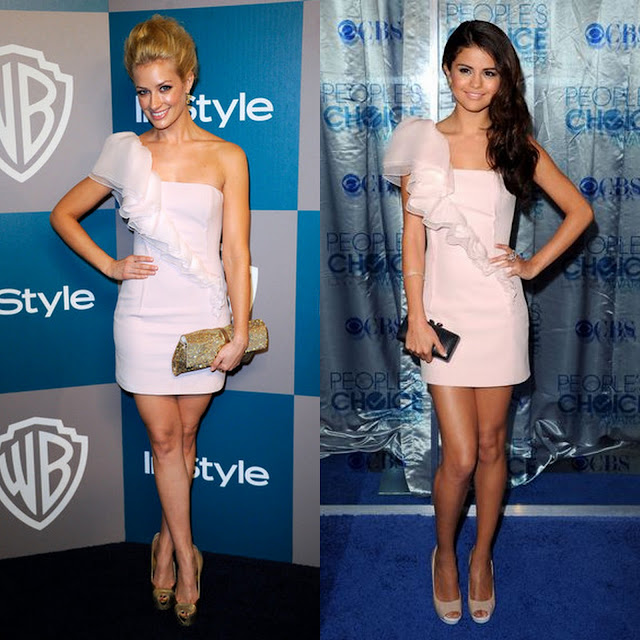 Left: Beth Behrs (from the sitcom Two Broke Girls) wore a Paul Ka dress to the 'HBO Golden Globes After Party' on Sunday, 15 January. Her pale shell pink mini has an asymmetrical frill down the bodice. She paired it with gold Giuseppe Zanotti peep toe heels, a sparkly gold clutch and soaring beehive hairdo.
Right: Selena Gomez was the first to wear the dainty dress, last year already at the 2011 'People's Choice Awards' on 5 January 2011. I'm presuming that Beth didn't watch the show. Selena looked pretty pairing it with nude heels by Giuseppe Zanotti, incidentally, and a black clutch. She had her to the side in cascading waves.

My Verdict: Selena 100%. Beth's space-age hair ruined it for me. I liked how Selena's hair mirrored the frill on her dress. 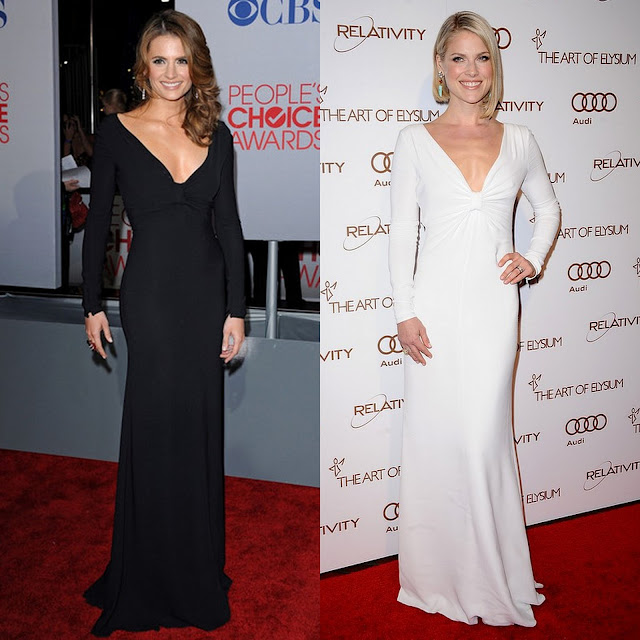 My Verdict: Although the knotted front detail was more visible on the white gown, I have to go with Stana, simply because the dress fit her impeccably well.


I would love to hear your verdicts:

1. I think Keira looks slighly better, but I think that's mostly because the black looks so good against her lily white skin - I think the dress would look awesome on Tam in a different colour.

2. I agree with starshiny, the same.
3. this was also the same for me!

I totally agree with you on #2 and #3, but I love Tamara's bare legs and shoes in that dress! great photos! xoxo

1. Tamera - I love the feminine look on her. Kiera's style is a little too goth-inspired for my personal tastes.
2. Selena - her hair, makeup and shoe selection complement, as opposed to outshine this frilly garment.
3. Stana - like you said, the fit is perfect!!!

1- since Keira looks too thin in this picture I vote for Tamara
2- Selena gomez
3- Stana, the black dress fits her better!

I have to say i agree with all your verdicts and with all your reasons why!! You certainly know what looks good and what doesn't. Great post sweetie :)

I totally love your "who wore it better?" series! It's such a fun game to decide (without peeping at your verdict, lol) then compare my verdicts with your choices. Our choices are a total match this time!

I agree with you on all three! Really love Kiera Knightley in Nina Ricci, the dress looks amazing on her small frame :)

I agreed with all your choices. I remember Selena Gomez in that gown and thought she looked so adorable!! Thanks for doing this post, I really liked it!

I absolutely love your blog! I cannot stop reading all your posts!

I think Selena is just adorable - I do remember seeing her in this dress and thinking that she looked impeccably ravishing ... if only I had the wallet to buy the gorgeous confection. :)

Thank you for stopping by my blog, I would love to follow you!

Sam,you have a discerning eye for details:)

I LOVE "Who Wore It Better!" I totally agree with all of your choices! Even though Kiera looks maybe a little too thin, the dress paired with the tights and heels says "Classy." And maybe Beth's dress fit her more curvy body better than Selena's but I agree on the hair. And Oh My Gosh, Stana looks stunning. I hardly recognized her as the actress from Castle, her beauty is always played down a bit on the show. Love the way she looks with her hair in the soft curls and the dress fits like a GLOVE! Thanks for stopping by and your lovely comment on Ooh La Frou Frou, Sam! Have a wonderful week. xo

neither on the first, Selena looked perfect and Stana rocked the dress!

~this is my favorite kind of post of yours, love seeing the same "piece" on two different people.
Keira, Selena & Ali. Yes the black dress is a better fit but I kinda like the looser winter white version.
BerryHaute

haha I agree with you for everything...
1. I like how Keira wore it because I think she looked a bit more classy with her black tights.
2. I liked Selena Gomez's hair, so I think she wore it better.
3.Stana Katic because she looks amazing in it :)

These were hard! HAHAHA I agree with your choices! But all of them look gorgeous. :)

Totally agree with your choices!!!
Among all those 6 girls Keira is obviously the best looking lady (to me, of course). She is very chic and stylish, if she were not English I would say that she is French.
I LOVE posts like this... could you post like this more often for me, please (I'm kidding :-)

Tamara, Selena and Stana have got my vote!!!

Great post, love to see this kind of things to compare two celebs with the same outfit

I agree with you too.. Selena has done justice to the dress by wearing soft curls.. :)

Thank you for ur sweet comments on my blog :)
Love
Akanksha

definitely keira, selena and stana btw nope i'm a fashion design student here in milan and they simply allowed me to come in to the cavalli show
http://hippiegonemad.blogspot.com/

1. Keira
2. Selena
3. Stana (but I like the white look too)
http://thesmallnoble.blogspot.com/

My verdicts match yours!

Mmmhh... for the first dress, I have a mixed opinion... on Keira you can see the lace bodice better, cause she's thin and pale white. On Tamara we can see the sleeve detail better. And I loved her shoes, but it's the dress the focus here, OK!
Then Selena for sure, although Beth's curves showed the dress in a good way - but maybe for her, black would have been better.
Then Stana, no doubt, cause I didn't really like the white dress on Ali Larter, and her bones were the focal point, I suppose... at least that was what I spotted! Again a great post, loved it!

My verdicts match yours! The first dress suits Keira better because of her long torso, it just makes Tamara look quite short. In the second I like Selena's version better, mostly because of her hair and because the pale pink really doesn't suit Beth's yellowy skin tone. And in the third, as stunning as Ali is, the dress just fits Stana better as it shows off her amazing curves.
Really loving your blog, follow each other?
km-iamyou.blogspot.com
x.

love how the nina dress looks on kiera

How fun post !
I think that Tamara, Selena and Stana wore the gowns best ;>

i like this kind of spot cause are really interesting.

1. Tamara - Keira is too covered up, that dress is too long to wear tights.
2. Selena - Cuter hair and shoes!
3. Both, Stana looks elegant in black and Ali looks vibrant in white.

love this kind of posts where i can choose :)

Normally it's easy for me to choose who wore it better but this time... I love all styles! I can't see anything I dislike...

Both bags in my trends report are from Asos.

Tamara, Selena and I liked both the black and white dress - they both looked gorgeous :)
Much love, Bailey from Vanilla Blonde

1. can't decide because i like this dress on T's body shape better, but it seems to fit K more correctly?

Dominika | Into the Bloom said...

Thanks a lot for your kind comment!!! Start following you on BLOGLOVIN and GFC!!! Hope you'll do the same!!! xoxo

Hi Sam, just click on the flag of your country at the top of my blog to have the translation :)
Kisses

I definitely vote for Tamara, Selena and Stana! I don't know why, but I think they look like prettier with the dess!
My favourite one is Selena... why is she so pretty?!
Much love,
xo -A

I love all the ladies on the right...that never happens.

Tamara, Selena and Stana!
Thank you for your lovely comment on my blog! Honestly you don't feel a difference between -2 and -6..when it's less than 0, you only notice once you go over -10 or so.. :)

I vote for Kira, Beth and Ali!

1. Keira or Tamara? - I like Tamara more, I don't like Keira's tights.
2. Beth or Selena? - can't decide, I guess I like both
3. Stana or Ali? - Stana, it flatters her body better than the white dress.

I prefer Keira, Selena and Stana.

I would say Tamara,Selena and Stana :)
Im just having SUNDAY WISH-LIST ,and I would be really happy if you could join it :)

The last two are a bit trickier, but DEFINITELY Keira in the first one! Then I'd have to say Selena and then Stana for the other two. Great selection love!

keira, selena and stana :D check out my new post!xoxo

I love the dress on Keira! This is always my favorite section in magazines... love that you have it here on your blog too!
-Jenny

Second Pic: Beth Behrs and Selena Gomez (like them both)

I agree with your pics!...except I think in the first photo I might have to go with Tamara. A full figure works better with this dress for me.
xo Annie
newenglandromance.blogspot.com

Tamara - her curves make the dress look so much better. Keira makes it look boyish.

Selena - hands down.
Stana - I'm going with her simply because the dress isn't white against a white backdrop.

oh love those kind of posts!
although i love how the dress looks on Keira (its looks more delicate than on Tamara) i vote for Tamara cause i like the girly approach she took, and i much prefer it with bare legs.
i like that Keira goes for the vamp look but the tights kind of ruin to me. its much more flirty with bare legs.
selena hands down.
hmmm tought call i like the white dress but the black one fits impeccably- i give it a tie.
kisses girl!

These are so much fun! I agree with all your choices with the exception of Keira. I vote Tamara... I like bare legs with the dress though would have preferred a demure peep toe shoe with it. On Keira, I think the tights ruin the femininity of the dress a little.