There isn't a persona Taylor Swift can't play. She has portrayed many different types of characters in her music videos and for magazine shoots, proving that she is adaptable to any style. The 22-year old shows off her versatility once again in the February 2012 issue of Vogue magazine. Taylor is transformed into a 70's style Rock Star for the shoot, photographed by the legendary Mario Testino. Interestingly, Taylor wears focal pieces from US design label Rodarte throughout the editorial. It's almost as though this was intended as a campaign to promote the brand, with Taylor Swift as their ambassador. 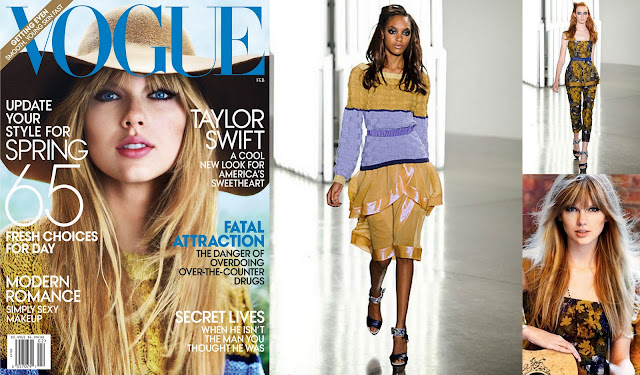 On the cover, Taylor wears a purple and yellow hand-knit basket stitch Rodarte sweater with a camel coloured floppy felt hat. To the right, she wears a marigold and blue flower print paneled top, from Rodarte's Spring 2012 range. 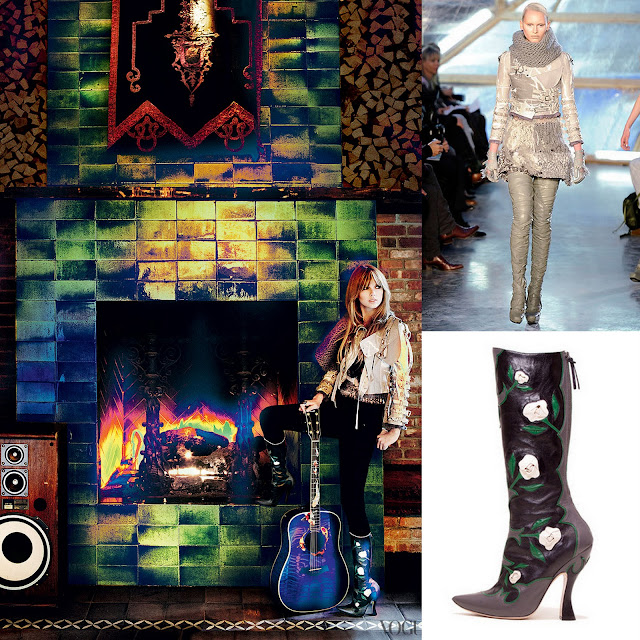 A psychedelic background frames Taylor, who is dressed in a cream leather and wool trimmed jacket and hand-knit top from Rodarte's Fall 2009 collection, teamed with Rag & Bone tights and rose embroidered cowboy boots by Miu Miu. 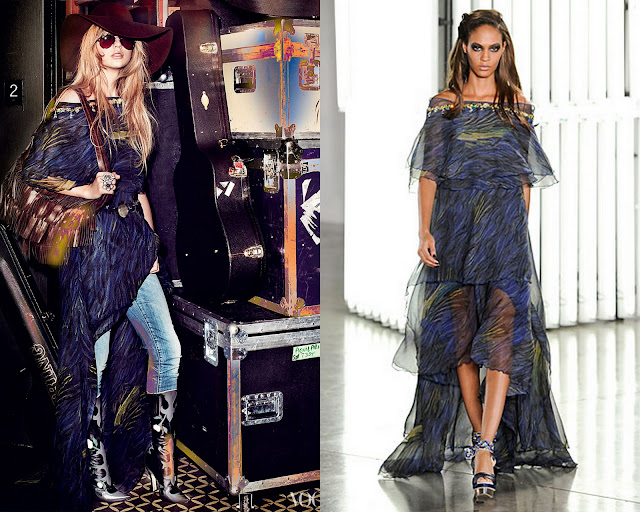 Continuing with the seventies boho vibe, Taylor is decked out in a floaty navy and lime brushstroke print Rodarte dress, worn over Levi's jeans and Miu Miu boots. She dons a floppy Patricia Underwood hat, with Rayban's and a fringed Andrew Marc bag. I prefer her belted look compared to the one on the runway. 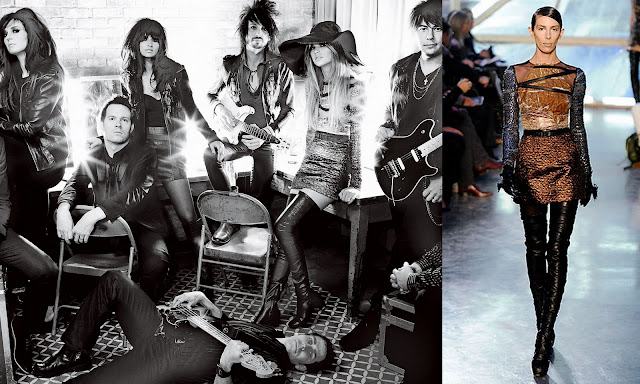 Even in black and white, this bronze beaded lamé leather 2009 Rodarte dress shimmers on Taylor. Her black thigh-high boots are by Michael Kors. 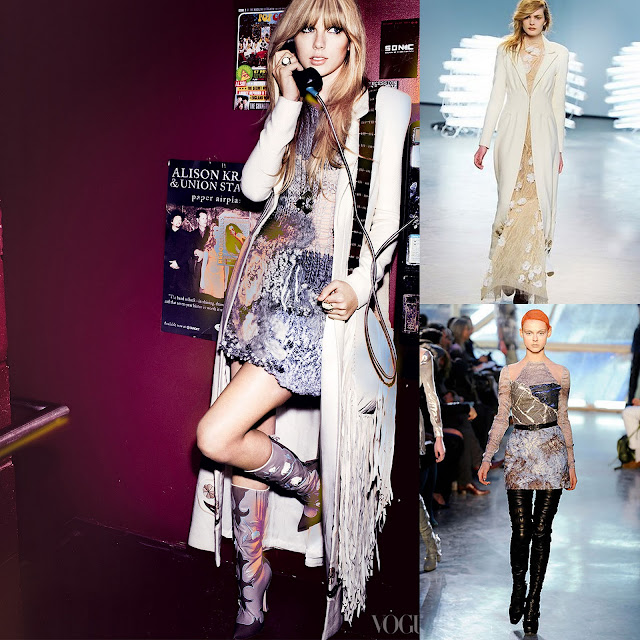 Taylor is hippie chic in an off-white embroidered prairie coat, paired with a marbled wool mini, both by Rodarte, once again. The look is styled with floral cowboy boots by Miu Miu and a tasseled Carlos Falchi bag. Don't you love her straight locks and new blunt fringe? 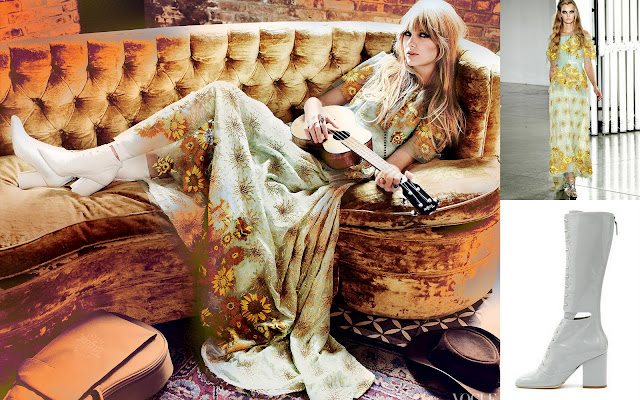 If this dress looks familiar, it's the same one Elle Fanning wore to the Critic's Choice Awards two weeks ago. This mint green Rodarte silk chiffon dress is imprinted with yellow sunflowers and has a sheer peasant style neckline. Taylor wears white cut-out boots by Jil Sander.
Do you think the focus of this photo shoot was to put Rodarte back on the fashion map, using the star power of Taylor Swift? Well, we can expect to see much more from the brand after this exclusive feature in Vogue.
Posted by Sam

taylor looks so perfect on this cover:) such a 60's style x

Beautiful and lovely post, i love the Rodarte Silk dress and the cover pic is breathtaking!!
But am not into White boots at all , i despise them alot!
xxxx

Wow! She looks so amazing in these photos! Hmm, this is definitely a side of her I haven't seen before. Hey, I think she reminded me of Heldi Klum here! lol. If these photos were for promoting Rodarte, she definitely did a good job!

Oh wow she looks incredible!!! I love the theme of this shoot and i really do like how her hair looks,especially how she's wearing her blunt fringe!! She just looks soooo beautiful on front cover! :)
Great post my dear!

Wow, I must say I am positively surprised as I never thought I would see the angelical Taylor Swift portraying a 70's rocker. The editorial is great and the cover is simply fantastic.
x

Taylor Swift is gorgeous here, I am loving her bangs and straight hair!! My favorite one is the 3rd picture with her in the navy dress, sooo pretty! Thanks for sharing!

I think Taylor Swift is beautiful! I think she looks very cute on cover!!!

About your question in my blog: I think you can ask to the hairstyle. She collaborates in my blog. She will be happy to help you! Check this link on facebook :) https://www.facebook.com/lazcanoflor
Kisses!! http://trendytips-trendygirls.blogspot.com

Beautiful photography! I like the look with dress, jeans and big hat!!! Taylor looks much better than model on that shot!!!

I actually usually find Taylor Swift looks 'mall ratty' and not so high fashion but in these photos she looks great! Vogue works their magic once again!

Taylor Swift looks so different, but I like it! The clothes in this photo shoot is amazing :)

She looks so gorgeous in the photos! I barely recognized her!

Taylor looks better than ever in these photos. Very interesting to have one label used so dominantly in the spread. I love Rodarte and these pieces are all so lovely - hope it gets them back in the game :)

I would love a brown floppy hat like the one she's wearing on the cover and a pair of those Miu Miu boots.

WOW she is looking surprisingly chic lately! Love her hair!

I just got the magazine and yup, she rocked it. I actually feel like I am seeing someone else on this... she just worked the look perfectly!
xo,
LMQ

She ROCKS! Such a great post! Take a look at mine and if you want we can follow each others.
http://fashionf0rlife.blogspot.com/

amazing post!!! thanks for your visit I hope you will want to follow me also on facebook
Keep in touch with fashion have a good day... keep in touch ....

What a fantastic post - you did so well to juxtaposition the runway look with her look published. Amazing effort :) She really is a gorgeous girl though isnt she!

She looks gorgeous on the covershot but my favourite has to be the one by the fireplace - such a rockchick shot!

It's hard to recognize her, she looks so different. But I like this photoshoot <3

She looks fabulous! Love her hair!

I love so much the clothes she's wearing! I also think that this style is perfect for her, it makes her hotter and she doesn't seem anymore a kind girl but a stronger girl! like it so much :D there's a new post on my blog honey! hope you'll read it and have a nice day! xoxo

Love the outfits, she rocks! :)

that doesn't even look like Taylor! wow she looks like a super-model!!! my fave pic is the phone booth one!

btw, Elle is so cute and fashion oriented for her age, is unbelievable!!

Taylor is so beautiful and so talented!! :) Great post!

i loved this spread! I'm even thinking about getting her bangs after seeing it earlier this month <3 love it.

She's so cute and the cover looks fabulous! I loved her hair and the clothes too! Particularly that dress where she poses with the guitar! So 70s (and I love the 70s fashion!)
I was out the whole day yesterday! Things get hectic now that I am only 3 weeks away from my trip!
But now I am back and I just gave you an award!!!
(I'm trying to build courage up to change my hair... Taylor's hair is great! ;-)

The last dress is really my favorite! Sooo beautiful!!

Taylor is so beautiful and so talented!! love her hair.

She looks so beautiful! I think she looks better with straight hair!
Check out my new post! <3

I really like Rodarte so it's definitely nice to see Taylor with some edge. this looks great.

I love these looks, Rodarte is one of my favorite designers!

I think they would try to get Rodarte back in the picture! I love Taylor Swift and I love this whole shoot! It's gorgeous!

She looks amazing!Love these pics!

I love your post! Awesome that you always have the scoop! I put a link to this post on my post about Taylor. Love her! Lovin' your blog too :o)

One word... wow. I like Taylor Swift but have only really ever seen her in pretty, soft, floaty things). She looks fantastic here. Is it a campaign to promote Rodarte? I'm going for yes - it's a subtle and clever way to do it

You're right, she looks great everywhere!