Two awards shows back-to-back, things in Hollywood are really starting to heat up. Last night saw the red carpet studded with a few big name celebrities at this year's Critic's Choice Awards. Here is a condensed roundup of the most striking looks from the event. 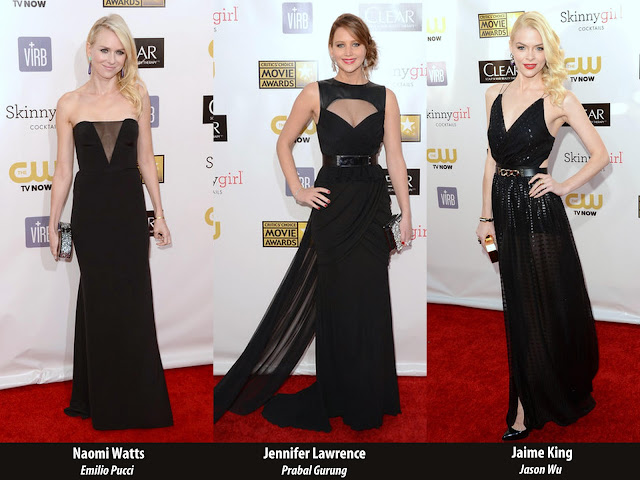 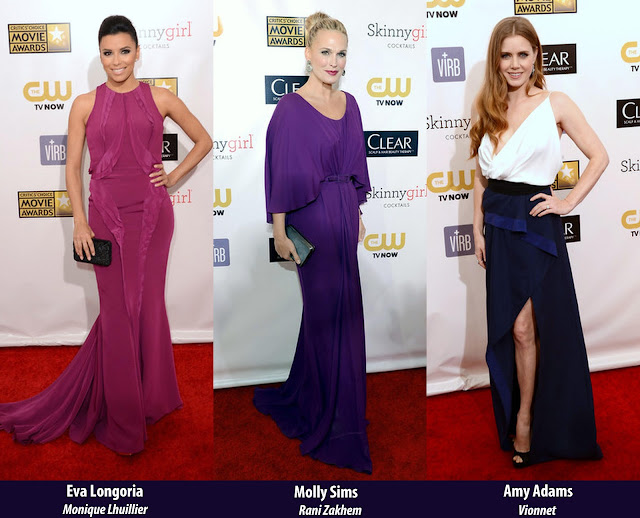 Eva wore a beautiful plum-berry hue, while Molly Sims went voluminous in a violet silhouette and Amy Adams opted for a two-tone draped dress with indigo skirt by Vionnet. 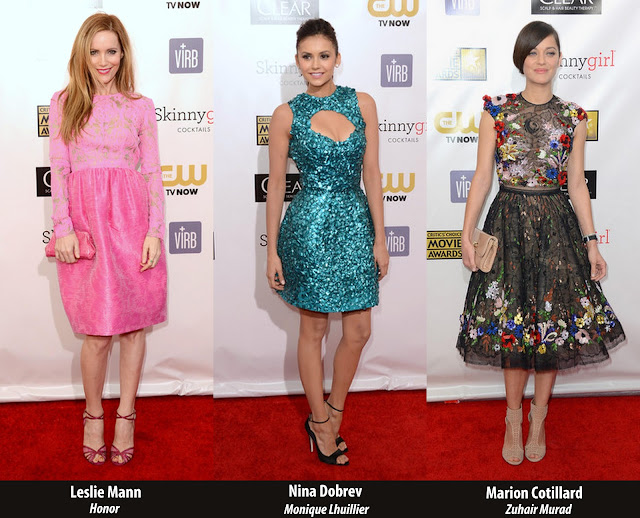 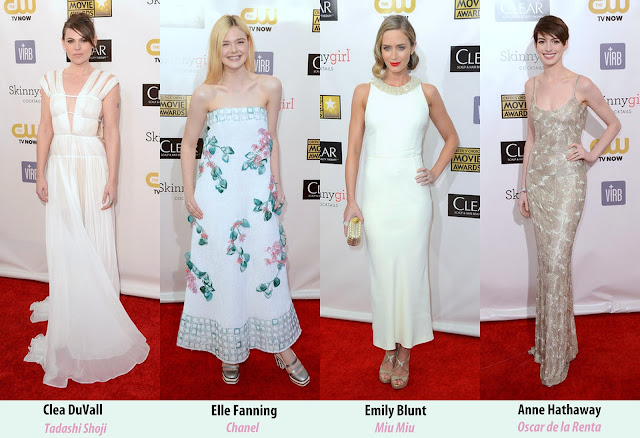 Clea DuVall went Grecian in this white chiffon wonder of a gown, Elle Fanning was a delight in a white Chanel dress with pink and green floral appliqués, only she could look this cute in what would otherwise seem like a wraparound bath towel. Emily Blunt and Anne Hathaway were pure elegance in their respective looks. 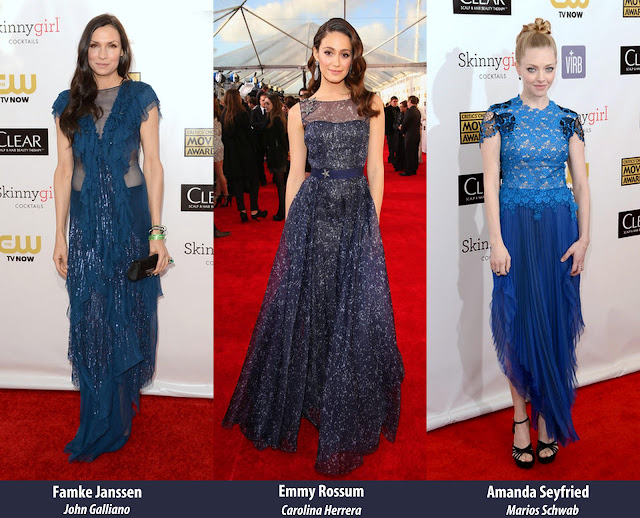 I found Famke's gown too heavy on fringing and frills. I was excited to see Emmy Rossum wear this stunning navy and white speckled Carolina Herrera gown, which I had on my red carpet wishlist. I like that Amanda went edgier in this royal blue lace embroidered Marios Schwab gown with pleated skirt. 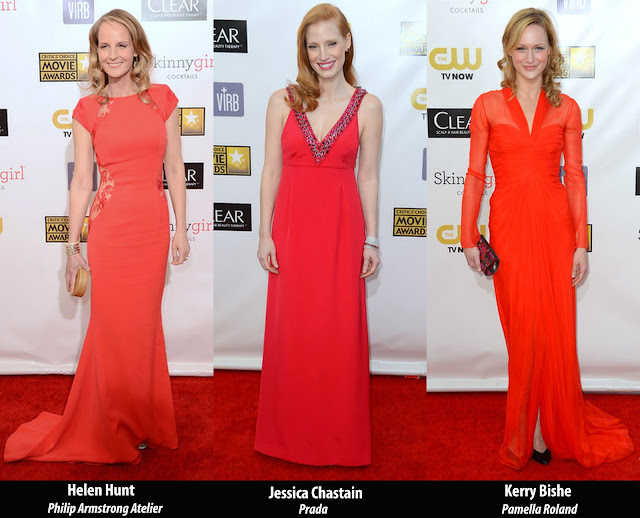 Tangerine was the official colour of the night. Helen Hunt exuded grace in a lace-insert dress by Philip Armstrong. Jessica Chastain proved that redheads can wear red and Kerry Bishe was demure in her citrus shaded Pamella Roland gown with sheer long sleeves.

Who was your Best Dressed at this year's Critic's Choice Awards?

If you missed this week's Friday Frills, catch it here.

Emily Blunt is so beautiful. Love her dress!

That Carolina Herrera dress is more than amazing!!!

Jaime King, Emily Blunt and Leslie Mann really look amazing. Their dresses are beyond gorgeous.. Wish I had them in my closet. Emily Blunt her hairdo is very pretty.

All that dresses are amazing. Have a nice day.

I love the last three. Coral is such a stunning colour this and every season.

Helen Hunt looks gorgeous. I also loved the first two navy dresses! However, I was not a fan of Elle Fanning's dress. It seemed shapeless and didn't work for her age/body type.

love those dresses ! They all look stunning ! Great choice !

I like Anne Hathaway, so simple elegent and sexy! :D

Loving the top three! Jaime King's dress is my favorite!

So many gorgeous women in gorgeous dresses! I think the black dresses are my fave, chic and elegant.

Blunt and Hathaway are my favourites

This is one reason why we love award season, all these beautiful gowns! My favorites are Eva Longoria and Jennifer Lawrence. Can't wait to see your selections for the Golden Globes this Sunday. :)
XO Wil Harris

hi dear! dindt knew you but i feel in love with your purposes!
hope you will also like mine, today my blog makes to months :)

i thinks your blog is too much! keep like this!
hope we could follow each other. wish you the best for this 2013!
loads of love

Marion Cotillard is the best! <3

love how different all of the dresses are but I have to say I love Marion Cotillard... she is so beautiful!

Can't get over Jamie King in Jason Wu. That dress is divine!

Marian Cotillard and Clea DuVall are my favorites!
Thank you for visiting my blog and for your lovely comment!
kisses
http://styleglaze.blogspot.com/2013/01/go-get-em-tiger.html

I adore Nina's sparkly dress, it's so pretty and cute!

Stunning dresses and great selection! Nice post, thank you for share! Also thank you so incredibly much for the comment you'd left on my blog:)
Have a fabulous time!

wow..what fabulous looks!! just beautiful....
I am your newest follower..pls follow back if you can.
your photos are fun to dream about!

Sam, you just know which is my choice!:D Jaime King with her Jason Wu gown, so so flawless!! It reminds the model who wears it at the prefall lookbook! Also I like Emily Blunt, totally another style but I find it natural elegant! Kisses and have a great weekend dear!:**

Famke Janssen and Emmy Rossum's dresses are my favourites. Each one of them look beautiful though.

Wow! so gorgeous and quite a few favourites to choose from. But I think I will go with Molly Sims as she is in my fav color and looks stunning. Thank you so much Sam for such lovely comments over at mine. You are such an angel xx

I am going for naomi Watts!!! I am a new follower of your blog! would u like to follow me back on gfc? I would be very happy! Giulia
thefashionmamas.com

Gorgeous Amanda! And how I love Jennifer here! Amazing styles you always find my dear! :)

love reading your blog and seeing the latest beautiful gowns!

i LOVE tangerine! i feel like if i got to walk the red carpet, id do it in an eye popping color like that. and eva longoria always has the most beautiful dresses

wow so many great designs, I can't choose :P

can't just pick one/..... most of these dresses are TO DIE FOR
I'm shure you agree with me ;)
Kisses from Miami,
Borka
www.chicfashionworld.com

I missed the awards show and this is my first opportunity seeing the dress recap. Thank you for the roundup! I am noticing quite a few sideswept hair looks...hmmmm...food for thought :) My fave may just be Helen Hunt's look...simple, classy, but with just a touch of edge with the lace inserts. Happy weekend, doll!

You know... Elle Fanning usually nails it, but that dress is not flattering on her at all :-/

Hi Sam, I love your saturdays posts:)
I love Amy Adams´s dress the most! have a nice weekend, kisses chris

For the first time, no one left me with the mouth open saying to myself: I love that dress :/
http://thirtysomethingchic.wordpress.com/

So many beautiful outfits in the red carpet, so difficult to choose. I like Mollie Sims's dress a lot.
Best Regards
Miss Margaret Cruzemark
http://margaretcruzemark.blogspot.com/

visiting here with a smile. take care.. have a nice day ~ =)

There were two dresses that caught my eye but nothing that really made me stop and want to learn/see more...

Favorites are definitely the black gowns so effortless chic.

I like what Jaime King, Marion Cotillard and Emmy Rossum are wearing.

Nina Dobrev was the star of the show for me! Her Monique Lhuillier dress was so glitzy and fun - and I adore the turquoise colour (it suited her perfectly)!

Although Emily Blunt and Jaime King came in a close second too!