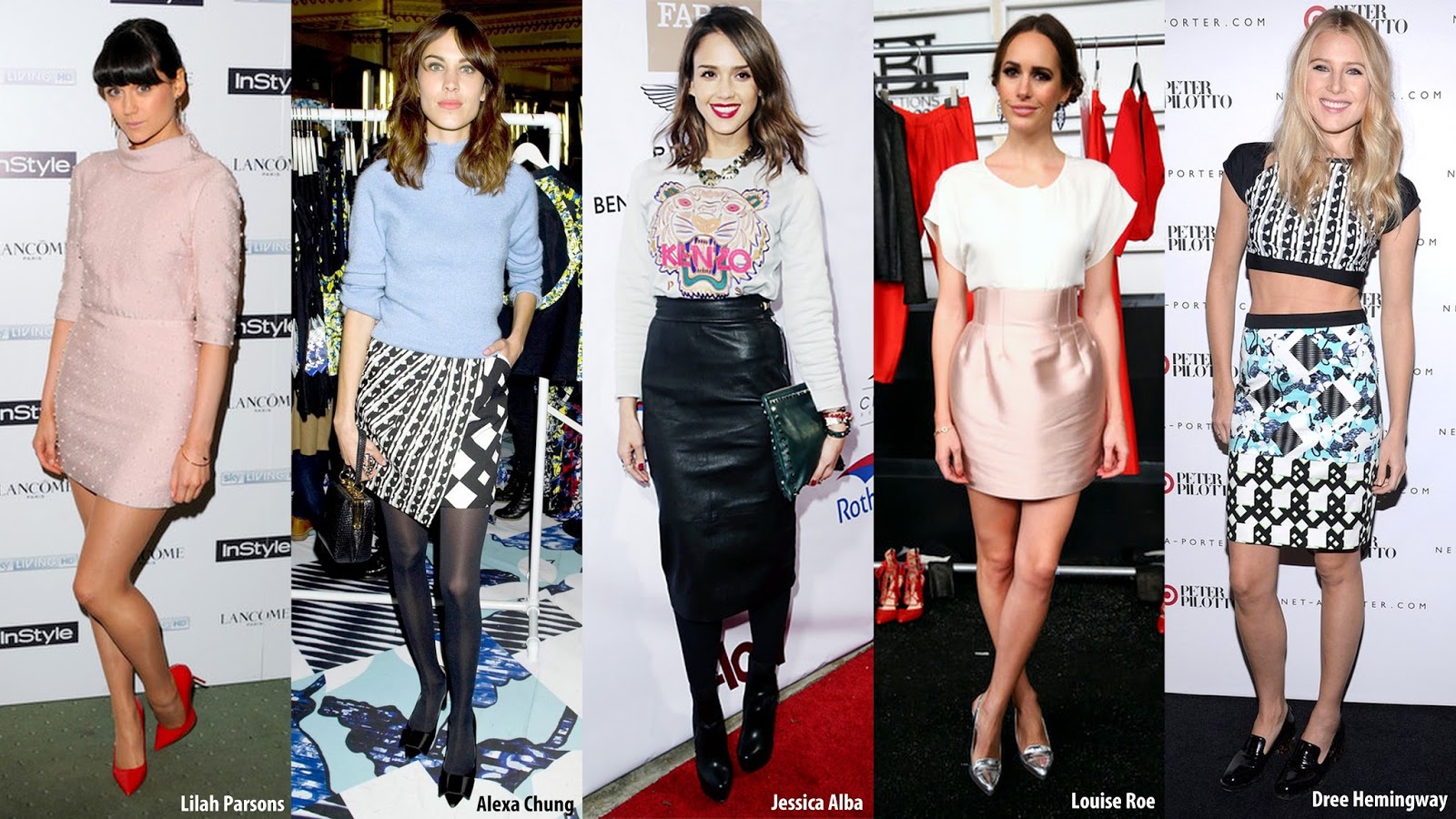 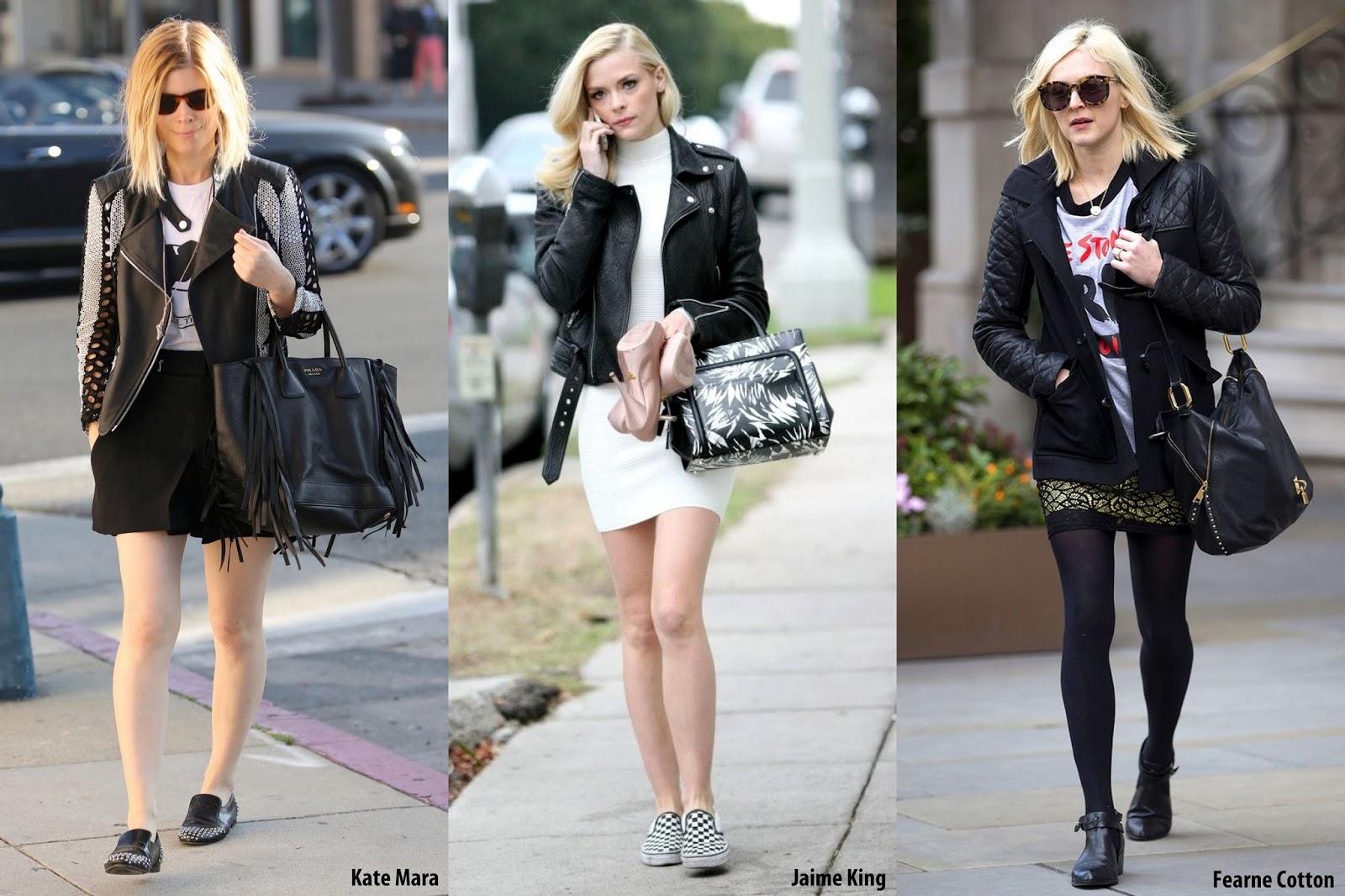 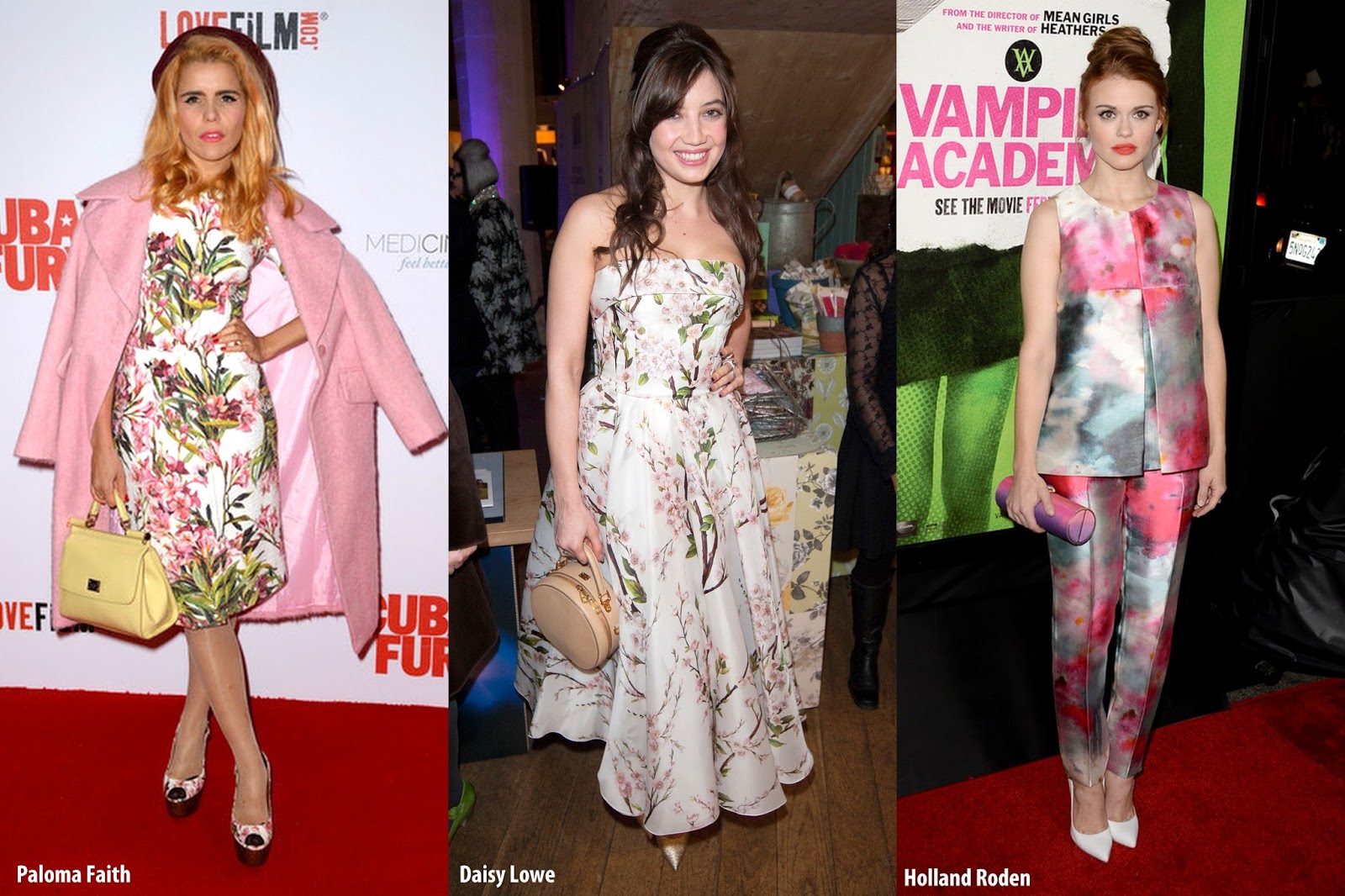 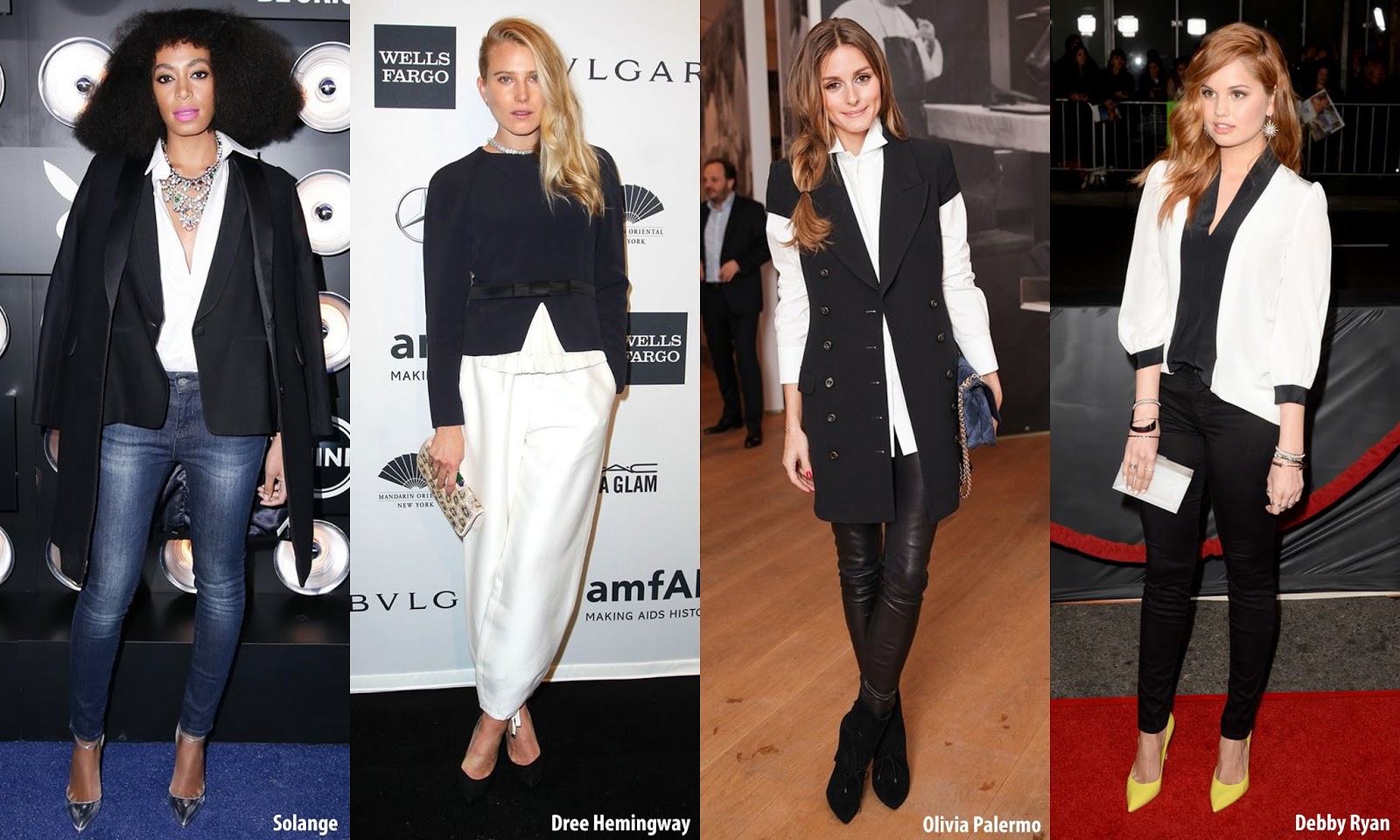 Solange Knowles polishes up her pair of skinny jeans with a low-buttoned white shirt, black blazer and overcoat, metallized by pointy-toe pumps and a statement necklace.
Dree Hemingway showed off her contemporary style in a black bow waisted top and slouchy white trousers with drawstring hem by Chloé.
Olivia Palermo wore a sophisticated black button-detail coat by Rachel Zoe, styling it with a white shirt, leather leggings, black ankle boots and a blue bag.
Debby Ryan wears a modish white and black blouse and pants by Kate Spade, adding a pop of colour via yellow René Caovilla pumps. 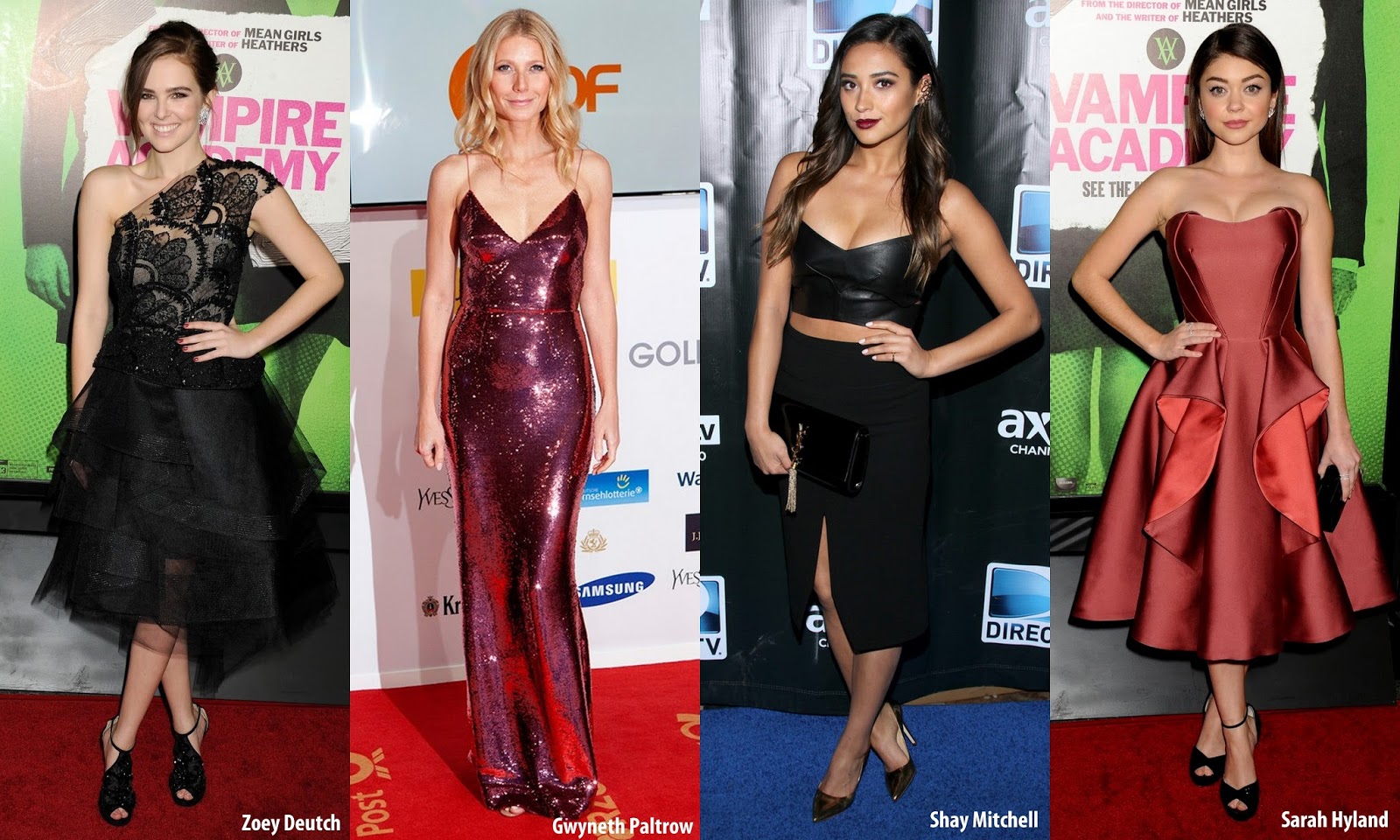 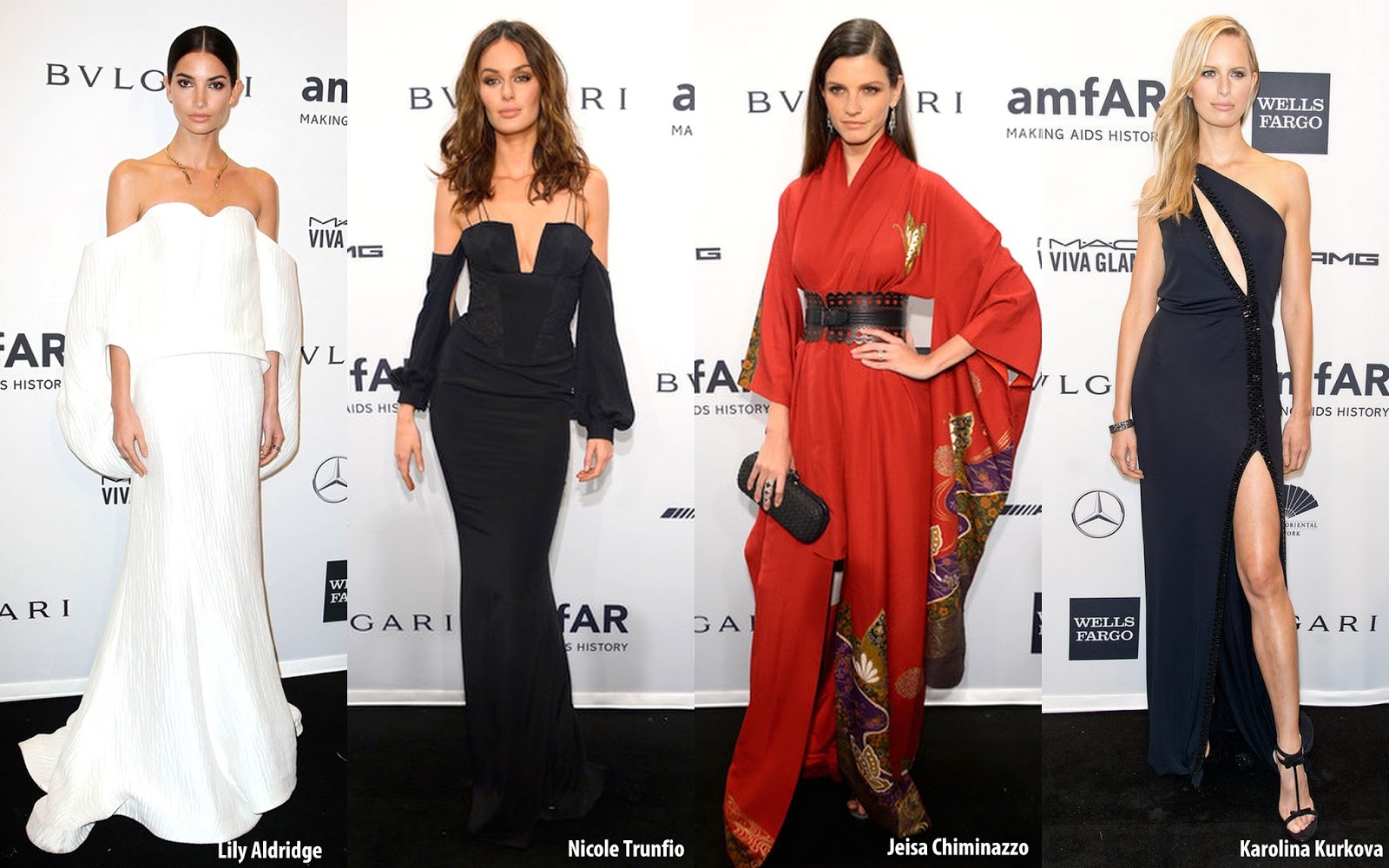 Who is Your Favourite 'Look of the Week'?

I'm impressed with Jessica Alba, she is stunning!!! XO

The pretty print is adorable set, I love theses dress!
Have a wonderful weekend Sam.
Kisses
The Indian Savage diary

It's always so hard to choose because you always showcase such amazing outfits! I think Olivia is my favorite though!

Biker chic is a very great an amazing style!
Have a nice week end, kisses

love this!!! reminder to self. NEED (not want) a leather pencil skirt!! so fierce!!!!

I love kate mara's look! That bag is too die for! Shay Mitchell also looks stunning!!

Absolutely enamored by Sarah Hyland's gown--the sheen is so luxe and the color is so rich!

Wonderful weekend inspiration! I'm a skirt obsessive, love Alexa's look. Thanks for your lovely comment on my blog, and have a great weekend! xx

Hello Sam, The skirting the issue is cute and pretty:). The Biker chic is definitely chic!! and the pretty in Pink is beautiful!!! I cannot resist the rest either:). Have a relax weekend yourself:).

Hello Sam, Alexa Chung looks so cool in her skirt and a sweater. Olivia looks good too. Gwyneth Paltrow looks so thin. Have a wonderful weekend.

great post as always sam! loving these trends and the outfits have some great inspiration!

Skirting the Issue outfits have got me inspired to wear my skirts more often! Lovely sets :)

wow they all look so stunning

Very nice looks! I thought the role model ones were very daring and cool. I also liked the first row. Who is your favorite? Thank you for your kind words. Have a wonderful weekend sweetie.

Oooh, I like Jessica Alba's look. I love the sexy leather pencil skirt paired with the casual fun sweater. It's a really great contrast. I also love the pants Holland Roden is wearing. I'm usually a big fan of matchy matchy, but I don't think the top fits her too well, but the pants are to die for! Great picks!! : )

pretty in pinks is my favorite look :) xx
www.ambifashion.com

Oh wow I am totally loving Jessica Alba's look! It is so modern and stylish! I like how she wore that Kenzo sweater with that leather skirt! Awesome combination! + she did great job in accessories as well! Love that statement necklace! :)

Hello Sam! I found inspiration for next posts in Monochrome mode and I loved Jeisa Chiminazzo´s red drap kimono. I wish you a lovely weekend too. Kisses from Spain:)

I liked Jaime King's biker chic look the most! Simple and so stylish! My second choice would be Olivia Palermo's monochrome look.
http://tanyetlamode.blogspot.com

Biker chic is my fav but Olivia de Palermo is fabulous and Jessica Alba too. I love her Kenzo sweater is the skirt.
Have a lovely weekend Sam :)

Olivia is my favourite!
Kisses
Oriana

Wow!! I love the last selection <3

monochrome and biker chic are definitely my favorites!
www.lettersimpromptu.blogspot.com

i love the biker, monochrome and skirting the issue looks, my fav's are Jessica and Olivia!
happy weekend dear!

Hi Sam! Hope you are having a gorgeous weekend! Here my choices: first looks I fell in love are Jessica Alba and Olivia Palermo, both cause their outfits are super stylish and impeccable, especially Id wear Jessica Alba's combo! Jaime King made me so smile, lol the "detail" of her keeping the heels on hands is so funny, despite that also her look is also lovely. Then I think all the supermodels in the last set look so stunning, Lily first.
Enjoy the weekend my friend, hugs! xo

Amazing dresses!!!!
Kisses
Francy&Stef
Chic With The Least
Also on Facebook , Bloglovin’ and What I Wear

Loved the Biker chic look and monochromatic ones, they all look amazing. You too have an amazing weekend xx

That Kenzo sweater on the first row, I want one!

Biker chic is my favorite! love all the jacket!

I love your weekly roundups! Once again there are so many gorgeous outfits. Love Louise Roe's outfit but I think Jessica Alba could do better! Love Holland Roden's outfit and Debby Ryan looks amazing and so chic, love the pop of colour by her heels.x Love Sarah Hyland's dress and the dress Lily Aldridge was wearing is to die for! Have a lovely weekend dear.x
xxxx
Stephanie
vidathings.blogspot.co.uk

Oh these are such inspiring looks. I love the Biker Chic looks!

Sam! Yet again you've got such an amazing collection of looks. I'm loving that last section. Some of those almost look like they could be Star Wars chic... haha!

The Pretty in Print section is amazing, too. I never knew that a long floral dress could look so elegant and not like a curtain from the 1980s, but apparently it can.

Hope you have a stunning weekend!

I love this 'Looks of the Week' concept! <3
My favourite looks (I couldn't pick just one :p) are from Louise Roe and Fearne Cotton :)

I like the looks from the ladies of Biker Chic :)
thanks for showing :)

I'm lovin the celebrity round up, I don't pay enough attention to what they wear but I always LOVE it!
Miche from Buttons and Birdcages

ohhhhhh jessica alba!!!! how gorgeous she is =)

WOW!!! I like all the selection this time Sam
And I am agree with many of the comments, Jessica Alba the best, very good styling :))))
(I have a new fb page, would be glad if you like it)
Kisses doll

Stunning looks and nice post
My Lyfe ; My Story
@MyLyfeMyStory ♥ ♥

Gosh Gwyneth Paltrow can do no wrong in my eyes.. I really hate how the press, media etc give her such a hard time, I think she seems like a really sweet person! What a gorgeous dress.. hope I look half as good as she does when I reach her age hehe <3

All about those biker chics! And I'm super pumped for the peter pilotto collection :)

So many amazng outfits.

Beautiful look.. I love so much louis roe!
Thank you for visiting my blog! Do you want to see my last post?
Le iconiche Timberland sempre di tendenza
My look of January

hmm. ..its hard to choose here!! I love everyone's look here....very different but everyone looks grt

btw do check out my new post
stay in touch
xoxo

Great looks of the week.=)

Great looks! My favorites are the monochrome ones.
Have a wonderful Sunday!

i love all of these looks.they are so different styles from each other so hard to choose a favorite.you did a great job again Sam.
xx
Style Of OzOz
Style Of OzOz Facebook Page

love her style so much … and your blog as well ;)

It must be Debby Ryan, even though I don't know her. But this outfit I would wear!
Thank you sweet Sam for stopping by my blog!

Oh my Lord, Daisy Looks just divine in her floral midi D&G Dress,I would def wear it if I would have the $$ ;-) Also HOlland watercolour suit is such an elegant eyecatcher and Statement Ensemble. Great collection as always my dear. Hope you have a great Weekend?

I love the first look so damn pretty and gorgeous (: x

I love the monochrome look so much !

What a great selection of looks - so many great outfits but I think Jessica Alba is definitely one of my faves! xo

Since I wear a lot of skirts and tops myself, I cant help but favor all the looks in Skirting the Issue the most. However, I also love the Role Models looks though they arent really suitable for real life mere mortals like us
xx
www.JuneWantsItAll.com

Wow! What can I say? ... intimidates me! Plots look!
I love all the biker chick:-*
Great post! I congratulate the ability and talent to curiosity to me!
I will always be coming back for more: *


I show 47 DIY ideas for Valentine’s Day - maybe you'll find something for yourself? ;-)

I love the first few pictures with the beautiful skirts! Thanks for sharing all these beautiful finds once again!
Thanks for your last comment!
Happy start in the new week!

Jessica Alba and solange knowels no doubt. Love it!

I love your blog :)
www.beauty-fresh.blogspot.com

Amazing compilation of looks, as always, so perfectly edited. MY favorite this time was easy to choose. It was Holland Roden wearing the gorgeous watercolor pantsuit ( like a flower submerged in water and its reflection) and of course the painted rendering of one. The clutch from Pearl Pearl cinches it for me . Another fabulous and inspiring review!
XX, Elle
http://mydailycostume.com/2014/02/stacked-bracelets-dainty-wrist-dead/

such a great collection ! love everything !

oh my God, those are some great inspirations! I really love the biker chic, it's so my style <33

Cute outfits, Biker Chic is really great.
Have a fantastic week my dear!

Everyone looks amazing. My favorites are the prints.

Great looks, love the Alexa Chung in the first series, i just ordered that skirt today! And Olivia Palermo is always flawless!

My favourite is definitely Daisy Lowe. That is such a beautiful look.

In love with Louise Roe's outfit, cute and simple!
All the ladies in the last row look absolutely glam.

Have a wonderful week dear Sam :)

Today with no doubt I choose Jessica Alba, fresh & stylish!

Jaime King is rocking the biker look, Daisy Lowe looks super cute, but Shay Mitchell is killing it in her outfit! She looks gorgeous and stunning! Love the 1st, 2nd, and 3rd look in Role Models! :)