He's Just Not That Into You

Advice from The Friendship Files

We've seen the movie, read the book and had lengthy discussions about it with our friends. So on this edition of the 'Friendship Files', I asked my galpals to share their experiences and advice on how to tell when that guy is just not that into you. This is what they came up with. 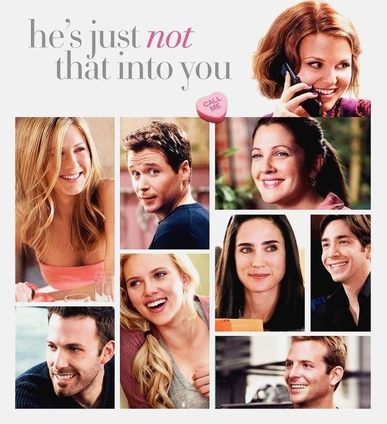 Signs That He's Just Not That Into You
*He finds every excuse as to why he can't attend that party/wedding/dinner with you. And you haven't even mentioned the date yet.
*When he still makes you pay for your share at dinner even though he can totally afford to foot the full bill.
*He never introduces you to anyone he knows.
*He only calls you at the last minute to invite you out - which means you are his 'back-up' plan when his initial plans didn't work out.
*When he stops doing the 'normal' things with you.
*He doesn't take your calls if he sees your number on his screen...however he answers seconds later when you call from private number.
*You catch him checking out the waitress at the restaurant when you're on a date together.
*He always shows up late. If a guy is into you, he won't want to lose a single precious minute with you.
*When he doesn't ask you to be his date at work-related functions.
*You're together for four years and you still don't have a ring around your finger. If he can't commit after that long, will he ever?
*He takes you out to far out and obscure places on dates and constantly looks around nervously to see if there's anyone that he knows.
*He doesn't make longterm plans with you.
*When spending time with his boys takes preference over spending time with you.
*When he introduces you to his friends by your name only - not staking his claim and labeling you as his lady.
*When he buys you socks for your birthday.
*He never leaves his phone unattended and never lets you browse through it.
*When his behaviour makes you start questioning him.
*He changes his email/Facebook password when he finds out you've figured it out.
*When he makes every excuse in the book as to why he can't meet your parents.
*He always takes his calls in the next room and claims it's 'work'.
*When he names his pet female dog after you.
*He says that he's somewhere that he isn't.
*He cancels his plans with you at the last minute.
*He sends out 100 BBM's per minute while he's on a date with you.
*If you're always the one asking to meet up or calling.
*He pretends not to see you at the mall then turns and walks the other away as fast as he can.
*He waits three days after a date to call you. If a guy is really into you, he will call you immediately to let you know what a great a time he had.
*When he is not prepared to be faithful to you.
*He says he's out on a business lunch, at 8 in the evening, on a Sunday, on Valentines Day.
*He doesn't call when he says he will.
*He stands you up on your first date
*If he doesn't answer his phone, reply your messages or is always too busy to meet up, well then...he just doesn't want to.
Thanks to all my lovely galpals for contributing. Hope this list helps girls out there read in between the lines and jump out before their ship sinks.
Posted by Sam