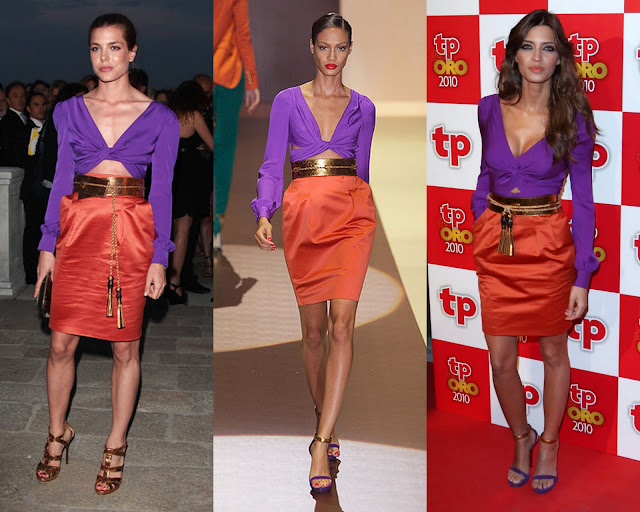 Charlotte wore the dress with strappy gold 'Malika' sandals by Gucci. The top part of the dress isn't fitting her well. Something's missing - it could have done with some drop earrings and a looser hairdo. On the runway, the dress was modeled by Joan Smalls and worn with Gucci 'Kelis' ankle strap sandals. Sara Carbonero (pictured right) looks vivacious in the dress, which she paired with the same sandals as the runway. The cutouts on her dress are much smaller compared to the other looks.

The same dress was also seen in various fashion magazines. Dutch model Lara Stone wore it for the February 2011 cover of French Vogue. Oscar nominated actress Jennifer lawrence looked lovely in the dress for Flare magazine's June 2011 issue. January Jones donned the dress for the May 2011 edition of Marie Claire UK.
I think Jennifer and Sara wear this dress best because they have the curves to fill it.
What do you think?
Posted by Sam