One Gold Dress To Rule Them All

The movie Lord of the Rings centers around a precious gold ring that all in Middle Earth were besotted with. The One ring allowed it's wearer to rule over all others. Everyone wanted a part of it's magic. This gold Balmain dress is a lot like that. It has a magnetic appeal that has enthralled fashion editors the world over, covering more than 10 magazines. The sparkly and sexy dress caught my eye today when I bought my copy of Cleo magazine, with Lea Michele glittering on the cover.

What is it about this 'It' dress that is so intoxicating? It has a wrap over design with deep v-neck and exaggerated shoulders. The gold beaded brocade draws you in with it's luminous charm and shimmering texture. It also photographs radiantly, the colour looking so different in each picture. 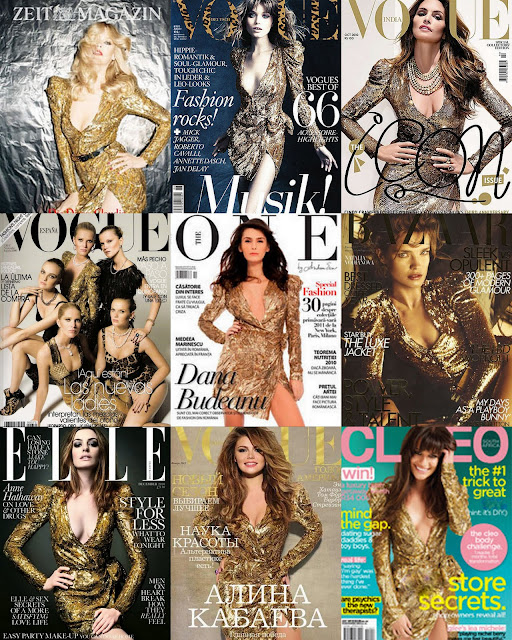 Top Row
Claudia Schiffer adorns the cover of Germany's Zeit Magazine. She was chosen for their 40th Anniversary issue. She wore the dress with a metallic gold belt and blonde waves.
Aussie model Abbey Lee Kershaw wore the dress for Vogue Germany's August 2010 issue. The picture has a darker tone to it and leopard print font.
Cindy Crawford looks as good as any 20-year-old model in the dress. She wore it on the cover of Vogue India in October 2010, with several gold necklaces.

Middle Row
The dress made an appearance on Vogue España in November 2010. German model Toni Garrn wore it for a group picture.
Romanian magazine, The One, featured Dana Budeanu on their November 2010 cover. The dress is shown against a clear, white background. The dress seems slightly big for her.
Harper's Bazaar UK chose Natalia Vodianova to close the year on their December 2010 cover. The lighting places emphasis on the shine of the dress.

Bottom Row
Anne Hathaway is yet another star that sparkles in the dress. She wore it on the cover UK Elle December 2010.
Vogue Russia began January 2011 with the gilded dress on the cover, worn by Alina Kabaeva. It was styled without the plunging neckline.
The dress finally made it to a South African cover, with Lea Michele gracing Cleo July 2011. She wears it with a fresh, youthful appeal.

The famed dress worn on the runway by Anja Rubik

Are you captivated by this little gold treasure as yet? Then don't let the price dissuade you. The dress costs $31 000, which in South African terms is about R213 930. Let's see...buy a new car or a gold Balmain dress? Such a tough choice! ;)
Posted by Sam

i loved anne hathaway in this dress when i got this issue of elle:)