The weekly roundup of style, on and off the red carpet. 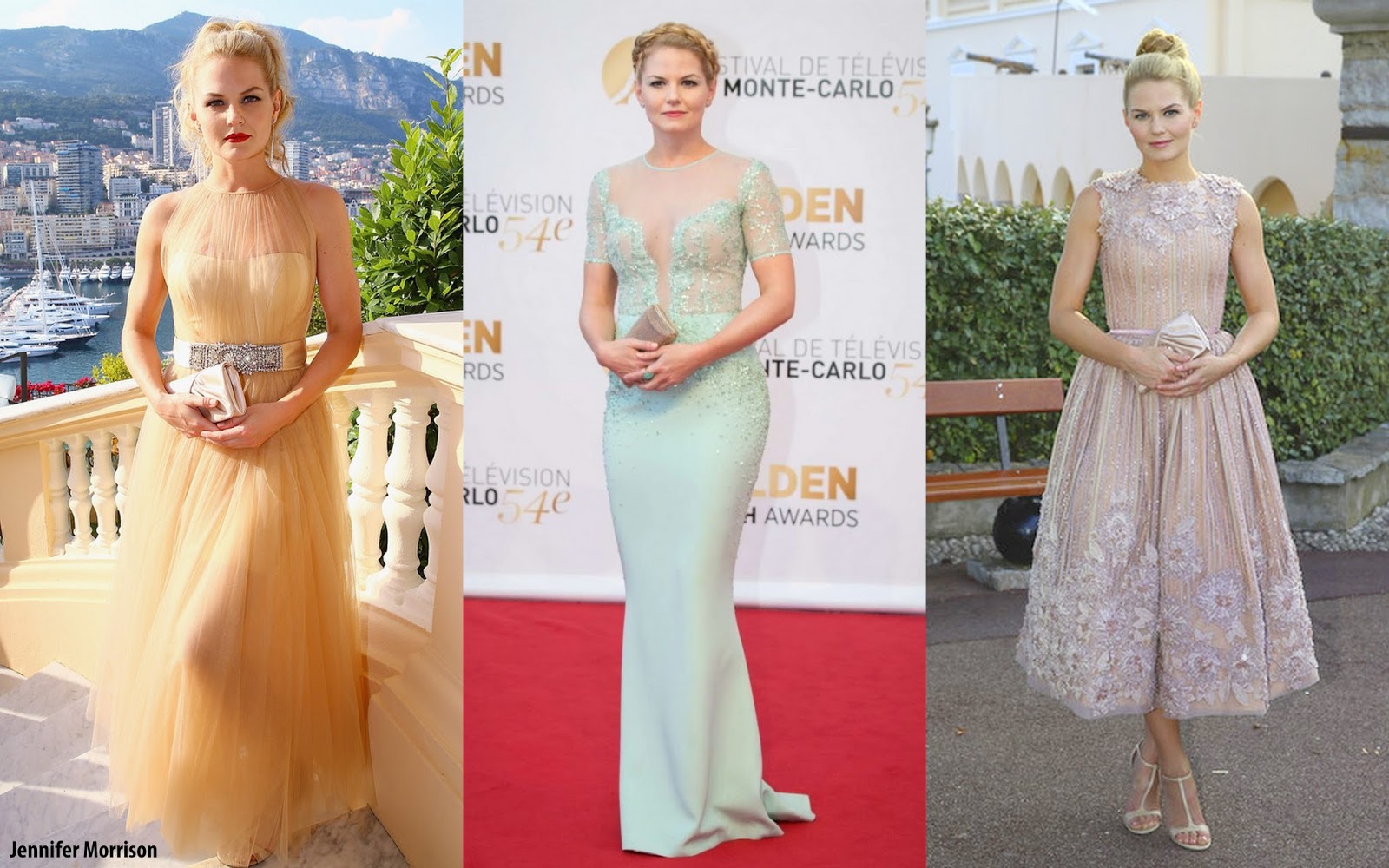 Jennifer Morrison graced the Monte Carlo Television Festival in a triad of beautiful feminine looks.
Left: Jennifer is swirled in a cafe au lait shaded Romona Keveza tulle gown with sheer neckline and embellished waistband.
Middle: She was pretty in a mint green fishtail gown by Georges Hobeika with sheer beaded bodice and a braided crown.
Right: The Once Upon A Time actress looked stunning in a lavender beaded Georges Hobeika midi dress with a flaired skirt, decorated by dainty floral appliqués and a belted waist. 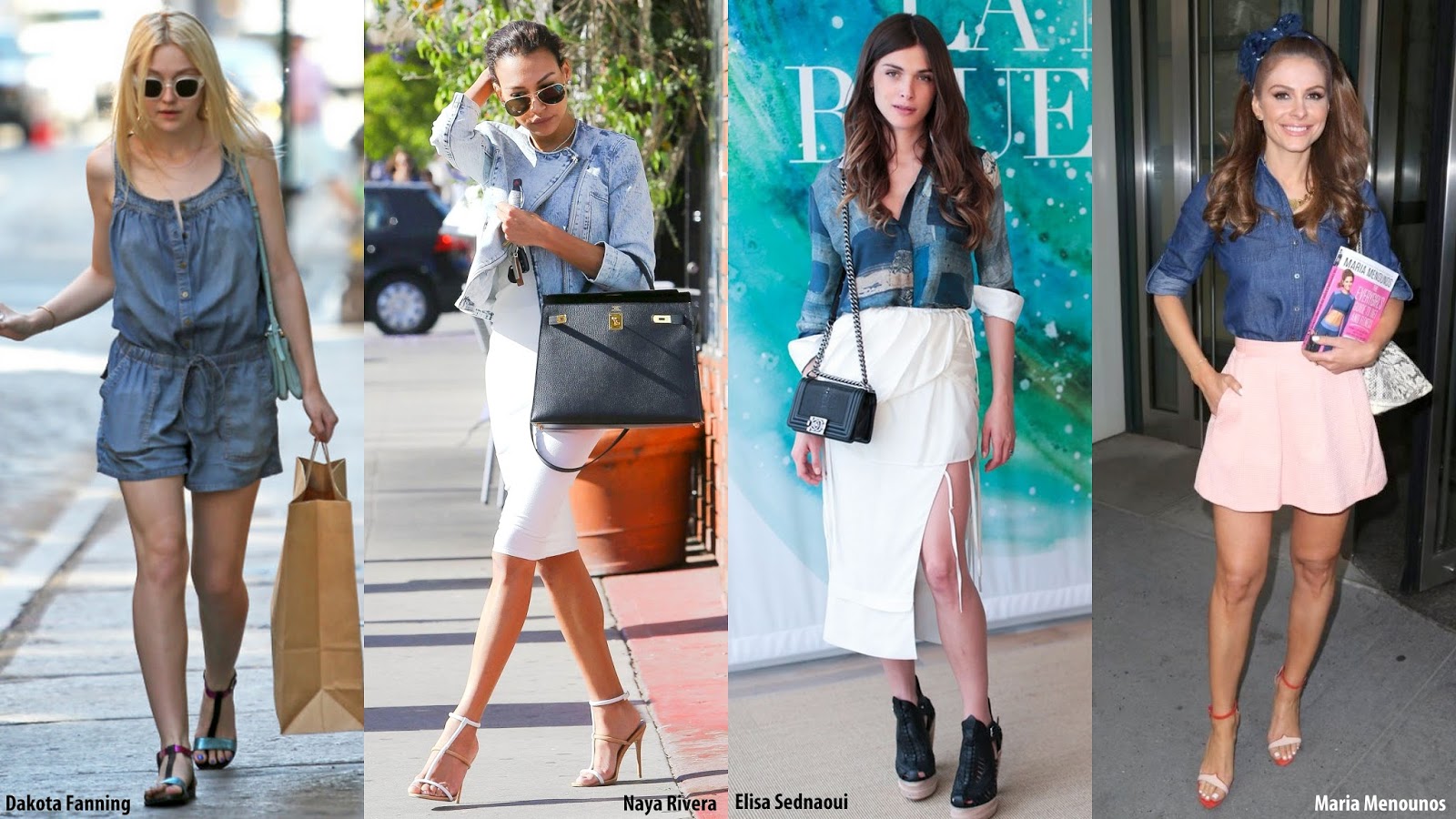 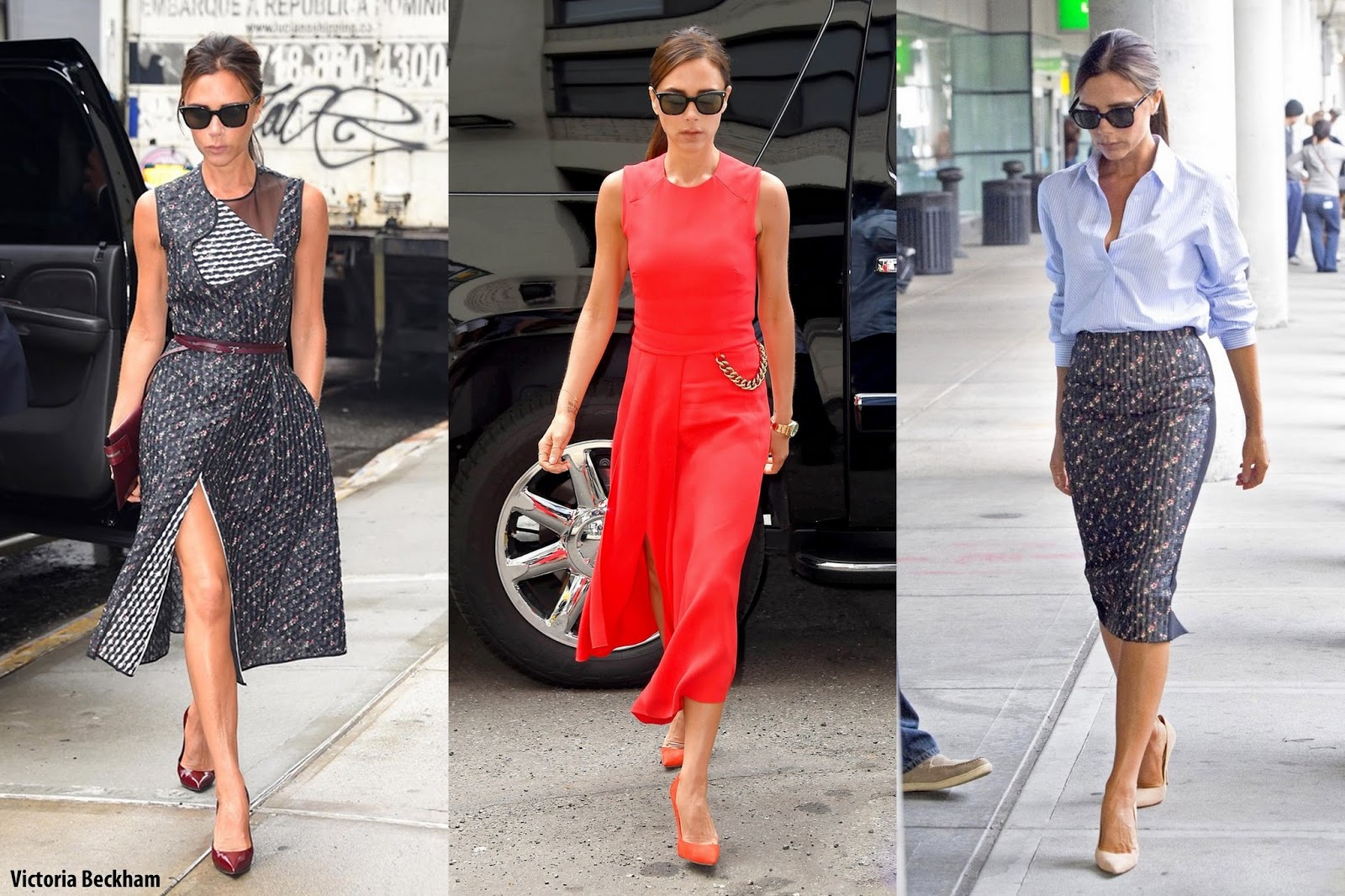 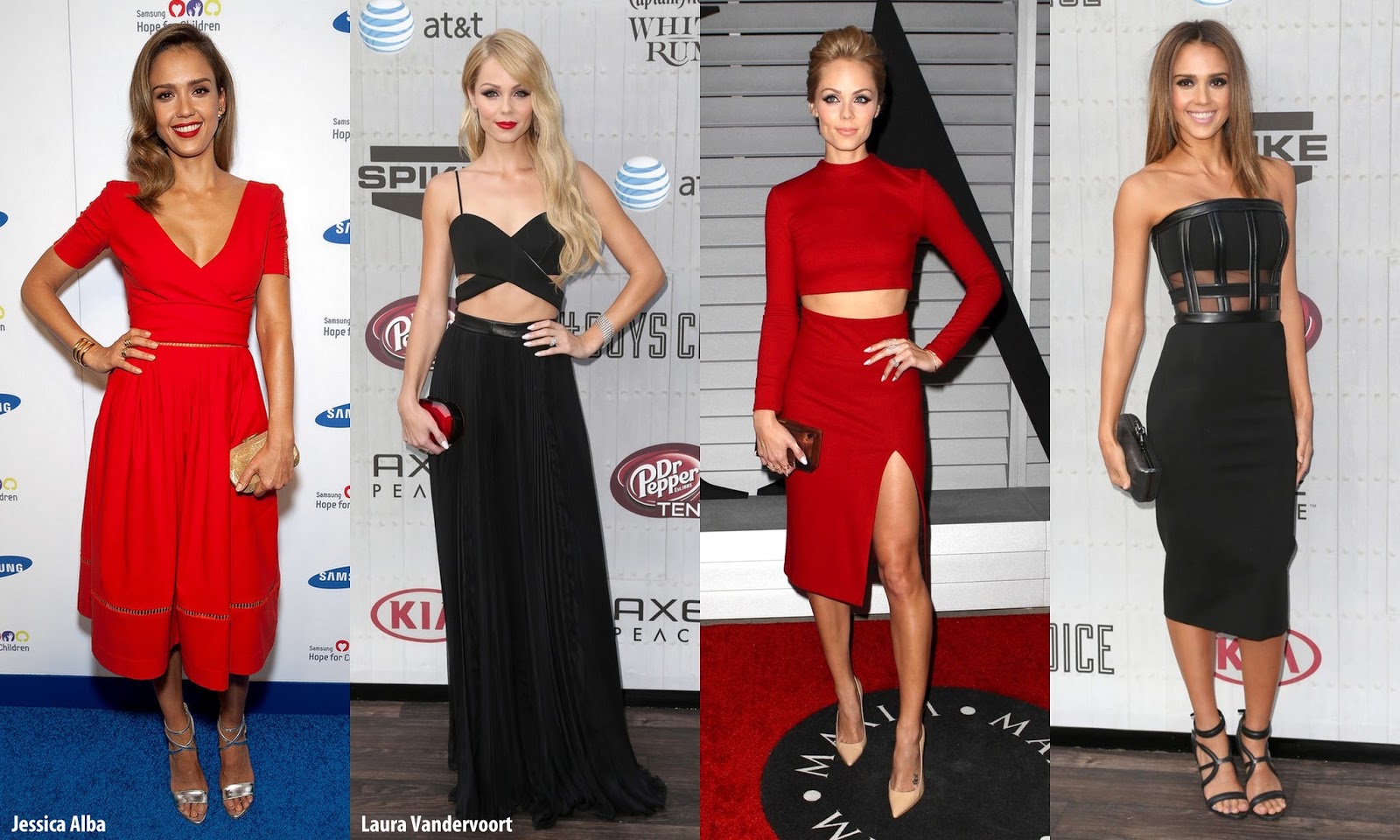 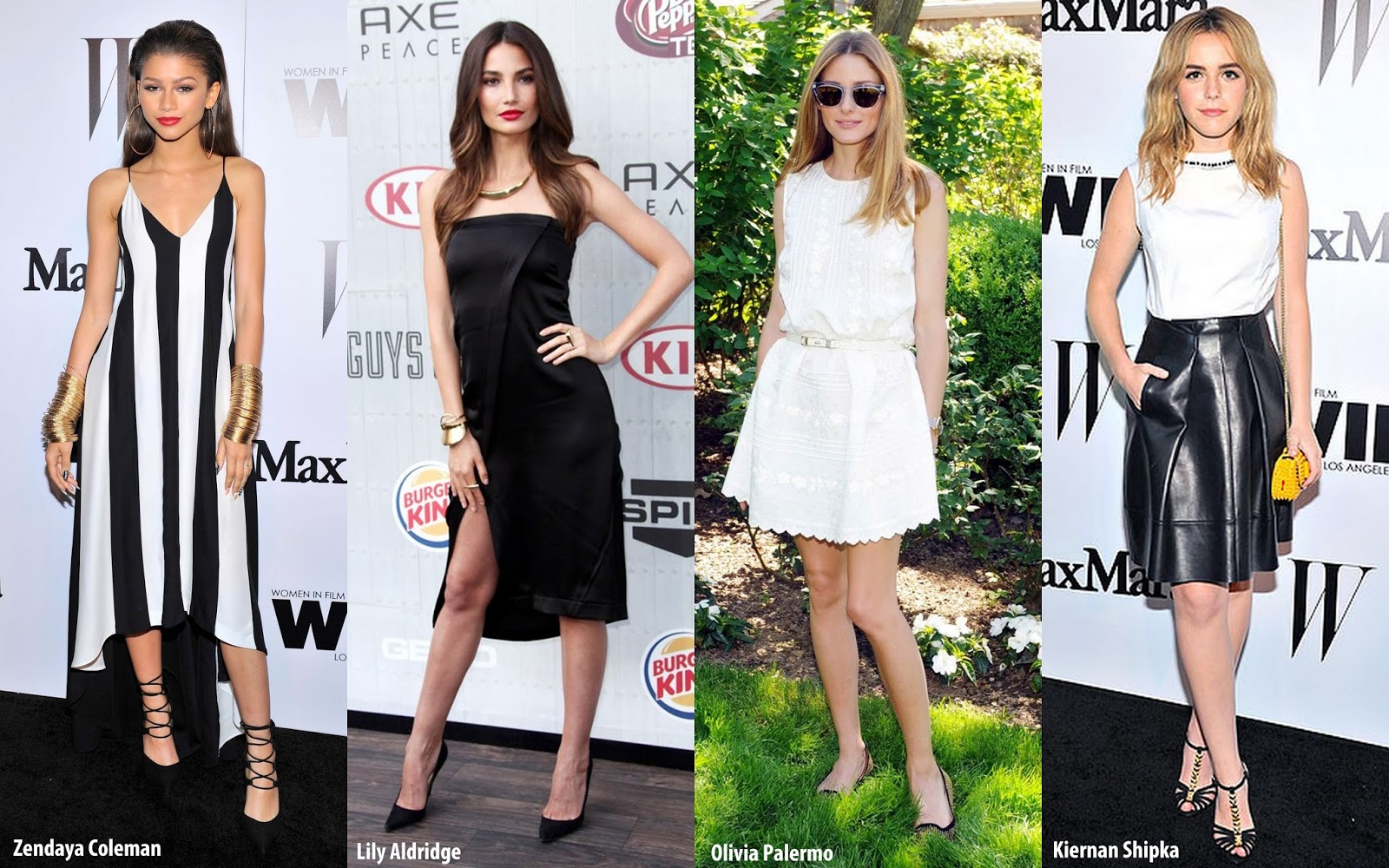 Zendaya was striking in a black and white striped Sportmax dress with high-low hemline. A multitude of gold bangles and tie-up heels finish off her outfit.
Lily Aldridge brings a certain allure even to the simplest little black dress, seen here in a 10 Crosby Derek Lam look with gold accessories.
Olivia Palermo's white embroidered summer dress with scalloped hem and belted waist is by Red Valentino. She wears flat metallic loafers and Westward Leaning sunglasses with her outfit.
Kiernan Shipka is all grown up in an elegant white silk tank and black leather Max Mara skirt, styled with chain linked heels and a yellow Louboutin clutch. 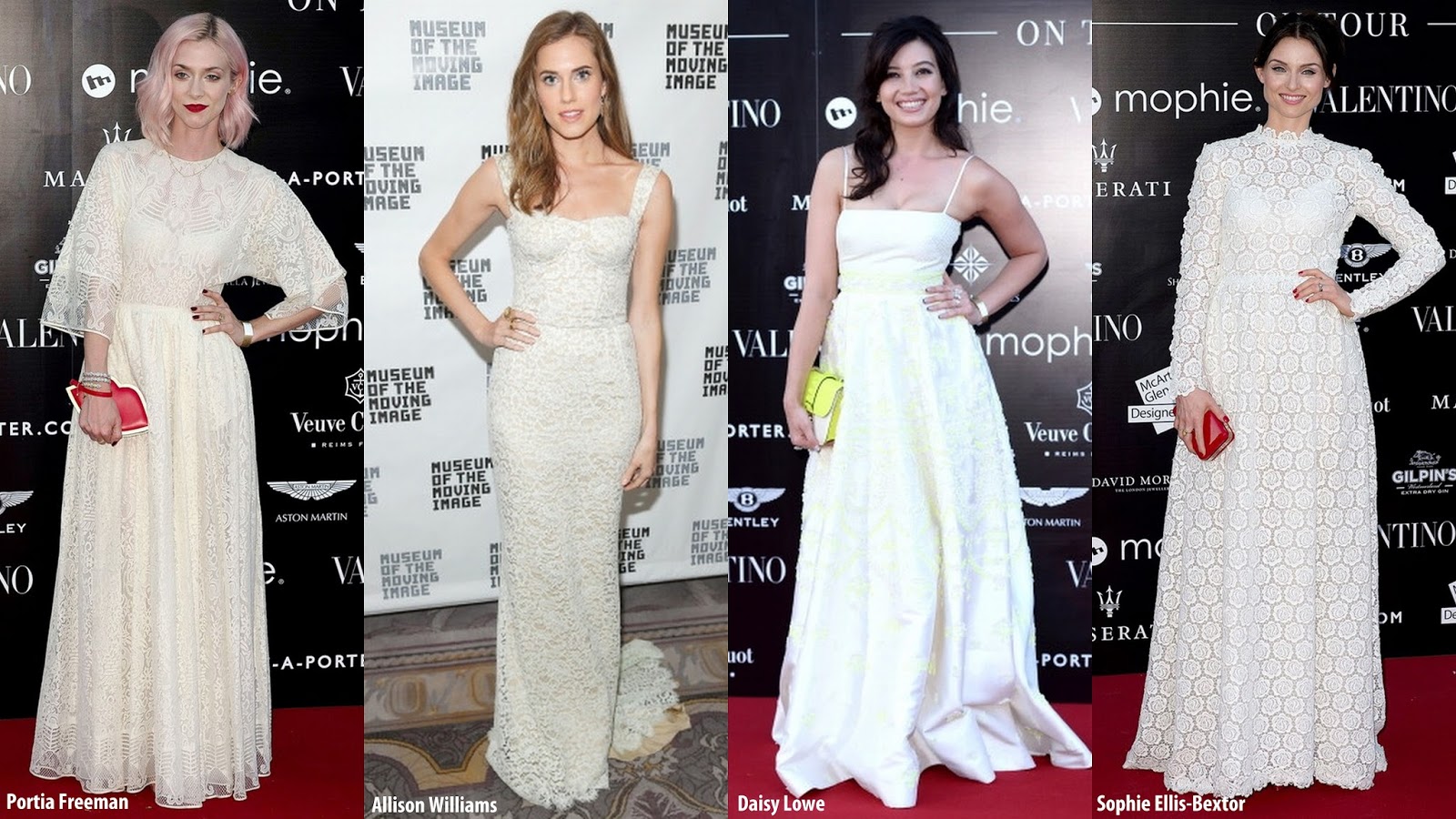 Who is your Favourite 'Look of the Week'?

*We celebrate a National Holiday (Youth Day) this weekend, so I will be back on Tuesday.
Posted by Sam

I am loving Queen Victoria !!!
The looks are amaaaaaazing!

HI Sam, I liked the pastel colour dresses of Jennifer Morrison. So pretty. Love to wear denim too. Victoria Beckham is so stylish as ever! Have a wonderful weekend.

Oh my goodness.. I'm so in love with Jennifer Morrison's Monte Carlo Closet!! All her dresses are drop dead gorgeous, she's the epitome of elegance.. such stunning dresses for a beautiful lady! <3

Love the white bridal inspired dresses, so beautiful. *__*
Have a nice weekend, too....

I don't know who Jennifer Morrison is, but her wardrobe is awesome! Victoria Beckham looks amazing, as usual.

I love corall! Many kisses! Have a great weekend!!!

Love the monochrome pieces plus the dress jessica's wearing in the first picture. <3

Denim Daze and Monochrome were my favorite sets!

Jennifer Morison's first look is so dreamy, shes my winner by far!

Gosh these looks are so forward thinking and really nail how stye should be in 2014, all fresh, on trend looks that are stunning to admire! <3

Dakota Fanning looks so fantastic that I mistook her for Sienna Miller before taking a closer look ;)

Hi dear Sam. I enjoying these ladies looks, I love the VB and the bridal inspired are the goddess. Jenifer Morrison's fabulous closet:). Have a good weekend Sam.

I don't think I can actually choose a favourite look this week, everyone looks amazing! x

Love Jen Morrison's and the denim daze.
All in all these celebs look so gorgeous.

Thanks so much for your sweet words, they made my day!
Wow, love the bridal ones!

Have a great weekend,
-Kati

i love all of them esp victoria bakham always so chic!!!
btw do check out my new post
stay in touch
xoxo

love the "denim daze" set!
have a fun weekend!
http://rueoh.blogspot.it

Victoria is my favourite out of them all, simply because she can be the most elegant person wearing the simplest pieces xx

I guess it has to be Jennifer Morrison in her Georges Hobeika midi dress. Usually in summertime, I prefer white dresses but this time this came out as my favorite! Thanks Sam for your lovely comment on my blog :)

omggg i die over jennifer morrison. i've been obsessed w/ her since she was on house!!!

that yellow tulle dress is AMAZING! honestly all of her dresses are so stunning. right out of a fairy tale.. such a contrast since she's in once upon a time and she's always wearing moto jackets and boots lol :p

wow this is a very inspiring selection. all dresses perfectly

as always a wonderful selection sweety! my vote goes for Olivia!
happy saturday!

Jennifer Morrison! aaah! I watched Once Upon a Time for the first season and part of the second, but then I sort of forgot to start watching it. I dunno why but it never hooked me. Ha! That is off-topic, but anyway, I love her outfits, especially that third one--it's a confectionary delight!

Thanks for your very kind words. I hope that you have a relaxing weekend, Sam! <3

They are all perfect <3

ah, the pastels are so pretty!!I also Iike the two photos with the denim top and white skirts!
www.lettersimpromptu.blogspot.com

These ladies are all stylish but I think that Victoria Beckham really killed it stylewise this week! Hope you're enjoying a lovely weekend Sam!

Jennifer Morrison is such a princess! love all the looks!

Jennifer Morrison´s outfits are...incredible. She was stunning for the Monte Carlo Television Festival and I also loved Victoria´s " bend it" collage. Kisses and I hope you are having nice days. :)

Jennifer is looking extremely pretty in her pink dress!

i'm loving jennifer morrison's outfits, stunning! and oh my, how grown up kiernan shipka looks. i cannot get over the fact that she is not 10 anymore, ha! x

Wow! A difficult one to pick this week. I have to go with Jennifer Morrison and also La Beckham!
I loved shirt and skirt combo she was wearing (I think from next Spring's collection-so a long time for us mere mortals to wait ;-)
Hope you are well Sweets xx

I love the Monte Carlo look, but also Beckham's... is not bad at all :)
Have a wonderful Sunday :)

Amazing looks that you show us!
I am really happy to see Victoria Beckham :)

Jennifer Morrison looks like something out of a fairytale in that first dress. Love it!

So amazing!! Victoria Beckham is always so fabulous!

Victoria Beckham looks so chic as usual.
Hope your having a lovely weekend Sam.
Beautetude

Denim Daze is my fave! :) And Victoria of course <3

i love focused trend recaps like this. you put this together so well!

Naya Rivera and Kiernan Shipka outfits are my favorites! Great selection!
Have a great Sunday:)

Wow wow wow Jennifer Morrison looks soooo amazing. All three looks are superb but the tulle gown is to die for. My favorite of the week. Have a fabulous Sunday Sam :D

Hey dear! Thank you so much for your comment :) I really like the denim looks here. This Summer I really like denim especially together with fine white pieces like silk blouses or lace :)
Have a wonderful Sunday Sam!
Lots of love!

Out of all the denim looks, I love Maria Menounos' the best. I can't believe she is like 35? She looks girlishly sweet in that pink and denim ensemble. I've always loved Jessica Alba's looks but this time I did not like the red dress on her. I love the left most dress of Victoria Beckham the most. Once again, thank you for putting these looks together. I always learn a lot about celeb fashion through your blog.

Jennifer Morrison all the way! She always looks so fresh, feminine and very classy. I really like her style. :) Actually, this was a very hard decision considering that all pictures you shared are awesome. But I just have to give it to Jennifer because aside from we have the same name, she is prolly closest to my style. :)

I am in love with all of Jennifer Morrison's dresses, they are all so beautiful :) xx

The third look from Jennifer Morrison is definitely my fave!

Also I love as usual each of the looks you have chosen, my favourites are in Denim Daze as I think white together with denim is such a perfect combo <3

Victoria Beckham look impressive in all her outfits, love her style!!

Without over thinking I'd pick any look from Victoria Beckham, just love her style so much!
Have a great week ahead, Sam!
Tany et La Mode

Victoria Beckham has my favourite looks in this post!

Victoria Beckham is not one of my favourites but I have to admit that the lady has style.
xoxoxo

This is a really great curation of photos! I love the all-white, bridal-inspired dresses, they are always so dreamy! xx

These looks ares so trendy! Love them so much!
xoxo
http://www.bloglovin.com/en/blog/4487669

Victoria is always pulling it off! Awesome

I am a huge fan of the colour yellow so the first dress is just a wowzer for me :)
Edita
www.pret-a-reporter.co.uk

Participate in my International
GIVEAWAY

I love J.Morisson, she is really beautiful et good actress

love these looks and enjoy your holiday!!!!!

VB is always perfection for me. Been crushing on her for years now and will continue to do so many years yet!

You always find the best looks! I love unusual (ie- not jeans) denim for summer, I have been living in my denim button down lately!

It may seem like I'm just saying the first one because it's the easier to say, but the first look from Jennifer Morrison is awsome :)

So much good stuff here. I love that red dress on VB, stunning!

Oh man, I'm kind of in love with Jennifer Morrison's dresses, especially the first and third ones. Just stunning!

Laura Vandervoort looks amazing. She really created a very classy take on this ultra sexy black cut out dress. Not many could pull this off looking as refined as she does.
Also, I love OP as always and Allison Williams nailed the wedding inspired look.
Hope you had an awesome weekend, Sam!
XO,Gina

Loving Jennifer Morrison's dresses.
I'll always be in a denim phase but the bridal phase is a big question mark for me ;-)

I love it the style of Jennifer Morrison is so elegant and beautiful!
xx

I love the dresses of Jennifer Morrison!!
www.alessandrastyle.com

Ooh, I don't wear a lot of white, but I'm really loving all of the white dresses this week!

how much elegance. kisses
http://anatxufashioncolours.blogspot.com.es/

Victoria looks amazing, I love how simple and not fussy those outfits are.

The monochrome and the denim section were my fans x
M