There was no doubt that Burberry Prorsum's Spring/Summer 2014 collection would be an exceedingly popular one. This is just one more beautiful dress from the saccharine pastel soaked range, which has been worn out three times in two months across continents. The dress is sheerly defined by lavender lace, a draped bustier, pencil skirt and one-shouldered flower appliquéd strap. It's hard to go wrong with a look this pretty, so it all comes down to the styling. 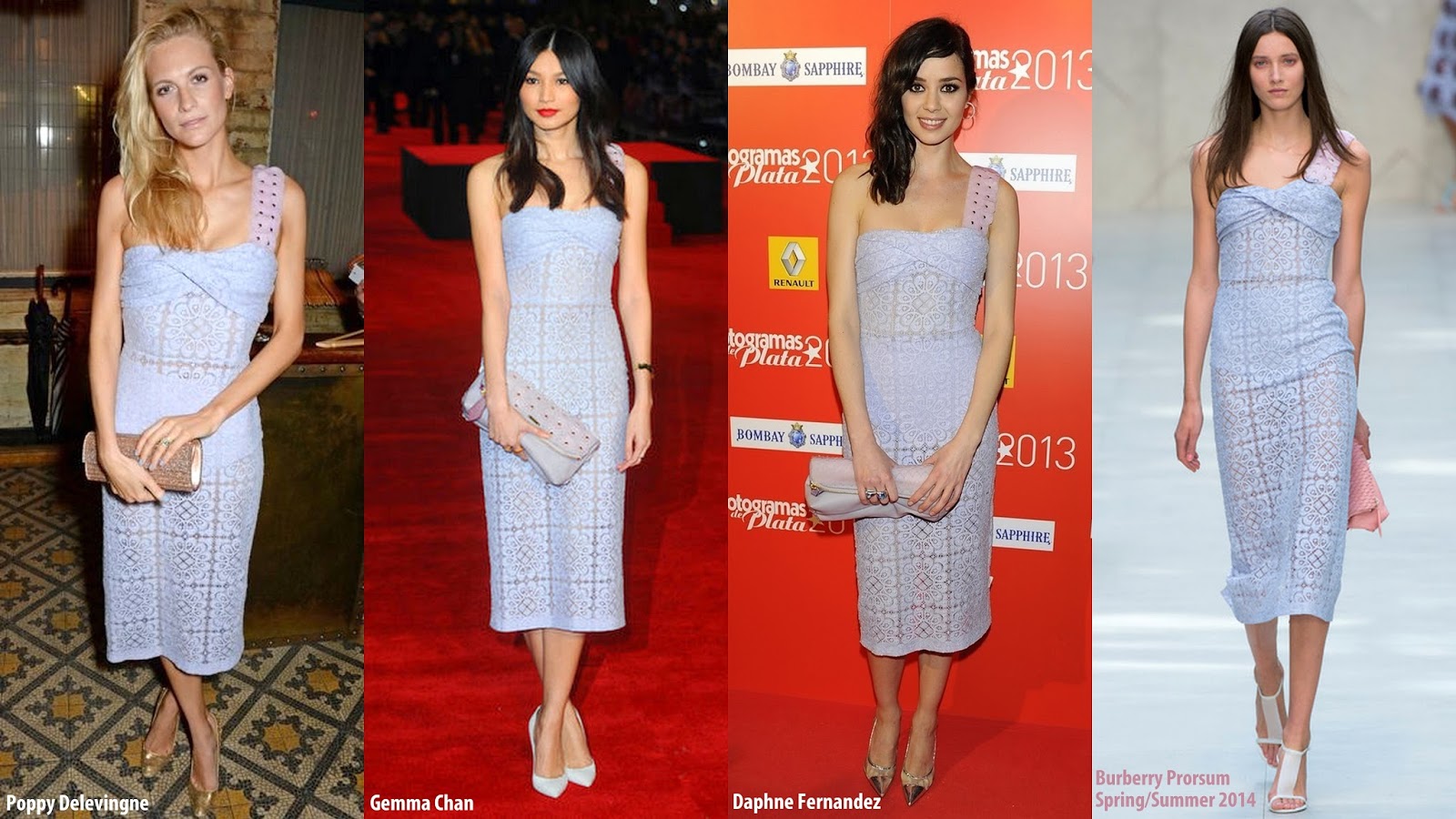 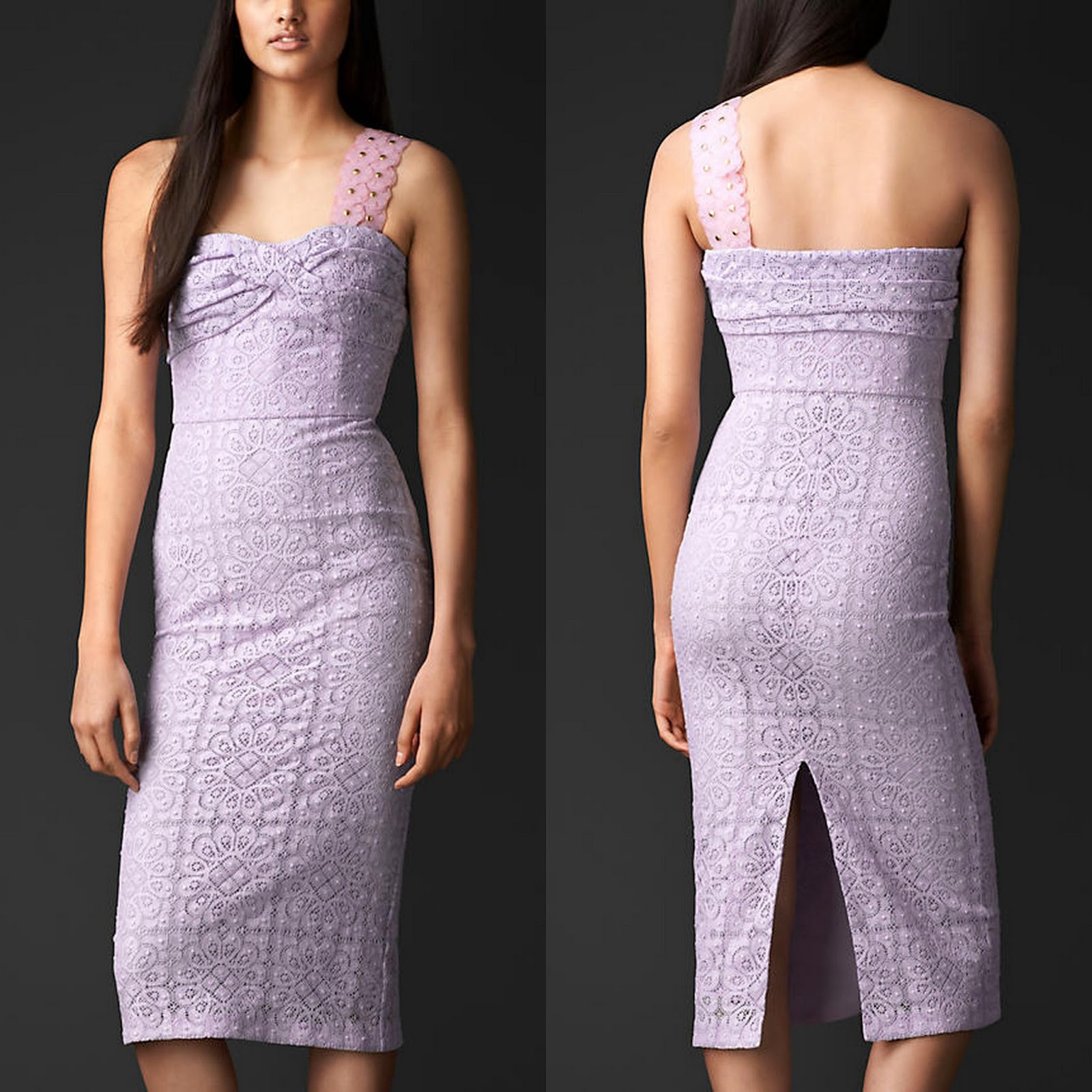 The lavender lace dress with plastic pink flower strap is available online from Burberry.com - If you have $2 495 to spare. Unlike the above looks, this one is fully lined in silk. Because only models and celebrities can get away with showing off their undergarments in public.

As for 'Who Wore It Better', the dress is faultless on each of these four ladies, but my vote is going to Gemma Chan, her posture and poise elevates the entire look, and I prefer the dress lined.

Who Do You Think Wore It Better?

I can see why this dress is loved so much by many. The intricate details is astonishing and the length is so elegant but at the same time hard to wear. While i commend each lady for taking a fashionable risk, it takes attitude, perfect poise and fit to make it work. So that is why i think Ms Gemma Chan knockout the other ladies out in that dress.

Gemma for sure, classy and chic!!

So cute dress! I think my favorite is Daphne :)
xoxo

I really like this feminine and romantic dress. I think Gemma Chan wore it better!
Have a nice week!

Amazing post I will go for Emma as well :D

Just got back in the game after a long break and missed you girl :D

Got a new post up and can’t wait to see your opinion!

They all look amazing but Poppy stand out to me.
http://tifi11.blogspot.com

Gemma is my favourite!

Gemma is amazing!
Wish you a great week!!!
xoxo
http://www.milanotime.net

I vote for Gemma too!

Hi Sam, this really is such a beautiful dress. I love how it was styled for the runway, the natural hair and make up really accentuates the femininity of the dress. Though all the ladies look so pretty :)

They all wear it well but just like you pointed out, I find the whole models and celebrities showing off their undergarments in public things very weird! Why do they do it? Why is it acceptable when they do it? Some questions can never be answered
xx
www.JuneWantsItAll.com

Poppy delavigne is my favourite, but honestly i love everything that she wears!
www.bonjourchiara.com
Bonjourchiara Facebook Page

Tough one! But I'm gonna go with Gemma!

Gemma Chang for sureeeeee! Love the drees by the way, I have two weddings this year... I have to look for something similar...
xx

i love it on gemma the most!!

I think Gemma Chan wore it the best :)

love the colour of the dress! my vote goes to Daphne! ciao

Honestly, that dress doesn't impress me much..
xoxo
http://pandamone.blogspot.com/2014/03/noir-blanc.html

This is a gorgeous dress, lace is wonderful, and my vote goes to Gemma, too...

Lovely dress. Gemma Chan and the runway model both wore it best.

Must admit they all look good, but Gemma gets my vote too:)
Happy Monday, Sam.

i like them all, so I'm goin all patriotic here and choosing Daphne ;)
lovely header btw!
have a great week,
s

ohh i adore gemma chen in it!! she looks amazing!

Gemma Chan is for me the best dressed! a fantastic dress!

In my opinion Gemma Chan is the best with this dress although I liked Poppy's accesories too( the only negative point is the messy hair) Kisses, Sam:)

Hi Sam, it is a very lovely dress even though Im not a big fan of the shape, I think is pretty hard to wear, it suits only perfect silhouette. And in fact my vote goes to Gemma Chan as well, she look very beautiful and refined with it, it also goes well with her hair. While I dislike it on Poppy and on the model!:) Wish you a lovely week ahead dear, kisses! xo

Gemma Chan all the way! She looks adorable and flawless!

such a wonderful dress!
my winner is Gemma Chan, too, so adorable!
happy new week sweety!

What a beautiful dress!

It looks the best on Gemma! So pretty!

I love it on Gemma the most!
http://mygenerouslife.blogspot.it/

The Land of Miabelle said...

Gemma
That colour is focused on brunettes <3

I really love the colour of the dress because it looks so serene :) Btw I love your profile picture so much. Very beautiful <3

I agree - Gemma Chan's look is the most polished and the red lips set it off!

I think everyone looks amazing as it's such a nice dress, but Gemma Chan looks phenomonal! xx

This dress is just so petty and feminine. I agree with you that Gemma Chan wore it best. Her accessories and red lip just take the look to the next level.

Thanks for your sweet comment! Cheers to a fellow self fringe trimmer. I don't mind when mine gets skewed either cause you can always do the side swept thing :) Btw I forgot to mention that your new Blogger profile pic is just beautiful. Have a splendid week Sam!

I like Gemma Chan and the model! HaHaHa Looks so good! I adore that dress.
http://www.averysweetblog.com/

love all!
NEW LOOK ON MY BLOG!
http://theartist-mona.blogspot.com.es/2014/03/jewel-dress.html

Do It For The Irony said...

Beautiful dress.... It's wonderfull! Thank you for visiting my blog! Do you want to see my last post?
Inside Me

The Adventures of a Shopaholic said...

I don't like so much the colour, but It's amazing !

This dress is really georgeus and Gemma Chan wear it in a perfect way!
Kisses

OMG!!! This dress is to die for!!!
Kisses
Francy&Stef
Chic With The Least
Also on Facebook , Bloglovin’, Instagram and What I Wear

Perfect on the catwalk! Love the sandals!

this is such a gorgeous dress!:) love the color!
i think they all wore it really well but the combination with white pointy heels is my fave, so i have to say gemma:)

Gemma Chan seems caught up my eyes over the rest. The dress is gorgeous itself, to be honest, does look beautifully on each one of them here, But the beauty Gemma Chan looks more elegant and perfectly with her White pointy - Toe. Love the dress so much dear Sam. Wish you already a wonderful Monday! :).

Such a gorgeous dress, love the color it is beautiful.
And as for who wore it better, It would be a tie between Gemma and Daphne :)

Gemma Chan is my favourite with that beautiful hair!

Have a fantastic day,
-Kati

Lovely dress, I like how Gemma Chan wore it :)

Great dress ! Thanks you my dear :) kisses from Poland

This dress is perfect! I think that Gemma Chan looks the best!
Have a wonderful week!:)

Stylish and chic dress! Gemma is my favourite!

It´s a lovely dress, too femenine and is georgeous itself. I think that Gema Chan is the best option. Kisses doll

I think Gemma Chan's look is the best!

I prefer Gemma Chan. But I don't like this dress for me. Kisses!

Oh how many of them wore the dress ;) Love Daphne!!! xo

It's a lovely dress and I agree with you: Looks better and classier when lined - going with Gemma Chan as well! xx

Keep in touch on BLOGLOVIN

wow that dress really is pretty!! I love the bustier styled top and it looks so classy!
I wish it wasn't so expensive though, but I have seen some similar dresses on wet seal (I think). The color of this dress is stunning though! I also agree with you that Gemma Chan wears the dress the best!
http://www.mybrokeneggshells.com

Wow, that dress sure was popular indeed! I kinda like Poppy's take the best; she looks disheveled and not super perfect, which is what i like and what I think makes someone exude style and effortlessness.

I love the way Daphne Fernandez looks in this dress!

I think is Gemma Chan she looks gorgeous!
xx

www.sakuranko.com
I want invite you to my Jollychic International Giveaway for win $20 Gift Card! 3 Winners~

Lovely dress!!! I really love it

Gemma definitely; what a babe with that rocking red lipstick! <3

Gemma, That was easy! Modesty wins the day, as does the perfect red lip!
XX, Elle
http://mydailycostume.com/

Gemma Chan wore it best, baby blue pastel look great on her.All dresses are perfect for spring I'd love to wear them all. Have a great day Sam & thanks for your kind words!! xx

I think Gemma Chan wore the outfit better, i think the dress suits dark hair the best and her red lips make her stand out from the rest

They all look so great, I can't choose.
Laura. xx

I think they all look pretty nice but I would say that Gemma has that little extra something.
xoxoxo

I like Gemma's style! This is a really cute dress :) Have a nice day!
www.lettersimpromptu.blogspot.com

I love Gemma the most, this is so beautiful dress!

Haha, I was curious to see who you'd like the dress best on. I agree, the second gal is rocking it with her red lips and dark complexion!

In my opinion Gemma :)

It's such a beautiful collection! I'm absolutely in love with the feminine silhouettes and pastel hues. It all makes it difficult to choose. But I think I like Poppy's look the best.
Beautiful new banner dear Sam! Very feminine and spring-ish, love the colour!

Honestly, they all look fabulous. They re all rocking it for me.

Gemma is the best!!
Alessandra Style

This is indeed a very popular design and I also love it!! RTW stores are also offering less expensive alternatives (at least Zara is: they've knocked off the style as separates, a lace skirt and matching top in baby blue, if I'm not mistaken; too bad these are now sold out, I wouldn't mind getting my hands on the pencil skirt). As for who wore it better, I also prefer Gemma Chan's styling, I think the dress looks better worn by her.
Thank you so much for dropping by, Sam, I really appreciate it!
Hugs,
Tany et La Mode

Fernandez is the best

My choice with be Fernandez :)
Kisses
Reinvent Yourself

What a Stylish post dear :) I hope you had a great week so far.

Check out my post...cute easter inspiration :)

Have a great day

LOVE Maria at inredningsvis - inredning it's, Swedish for decor :)

i think gemma chan wore it the best - elegant and classy. but the others are also very nice - i also like poppy's style. she adds a casual twist to the dress.