My current wardrobe 'Must Have' has to be the trendy tailored blazer; and while we've stocked up on the classic neutrals, floral prints, pastels and brights, fashion label Mlle Epaulette has taken a more glamourous and polished approach to the trend. The creative concept of Lebanese designer Remi Sabbah, Mlle Epaulette sets itself apart from the usual run-of-the-mill brands by placing exclusivity on constructing chic and tailored blazers.

For Winter 2012, Sabbah employs the luxury and opulence of sequins, Swarovski crystals, animal prints, velvet and satin in her exquisite collection. Sharp cuts, eye-catching colours and cropped at just the right length, these swanky tuxedo coats are flattering to every figure. A dazzling addition to that little black party dress or why not upstyle a simple t-shirt and pair of jeans with one of these irresistibly elegant pieces. 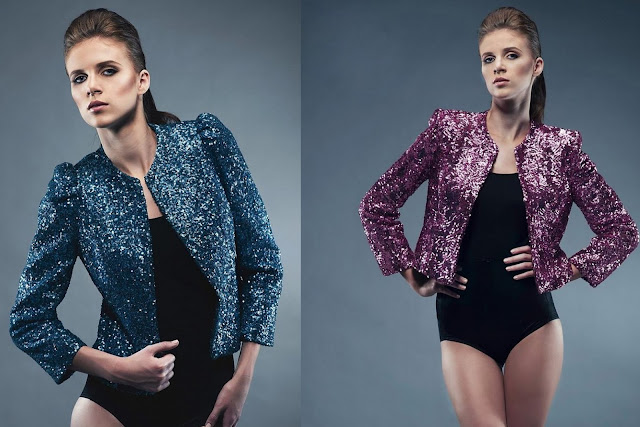 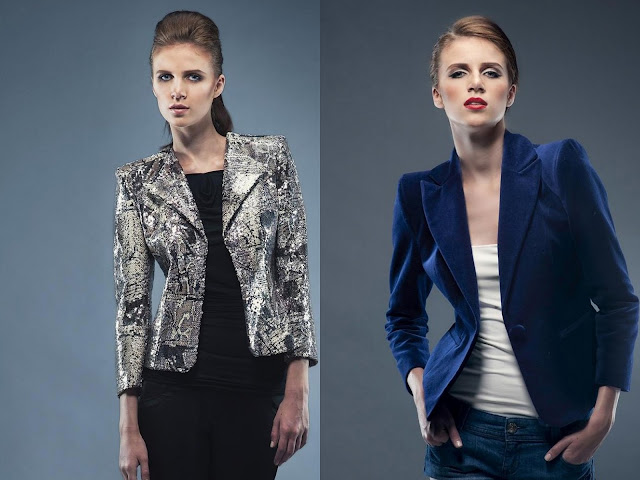 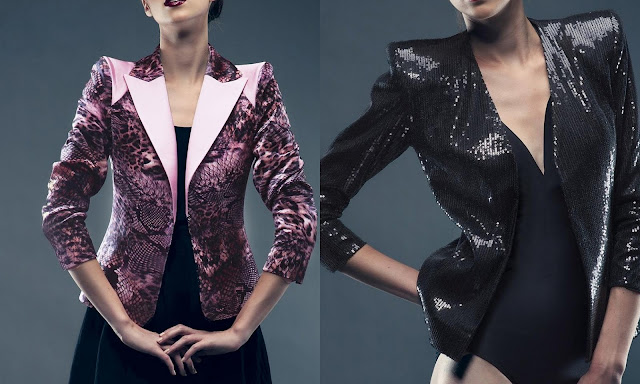 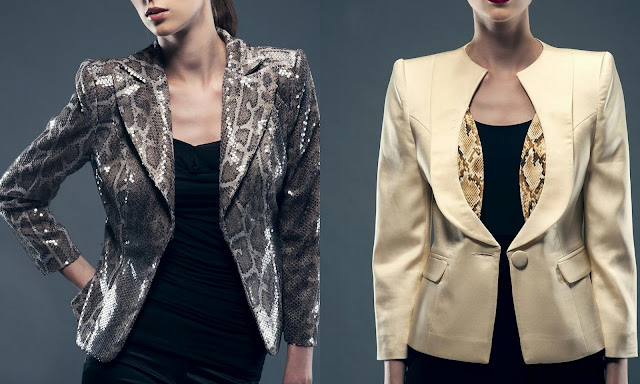 Take a walk on the wild side in a sequined snake print blazer or add a sophisticated touch to office wear with a creme satin coat. 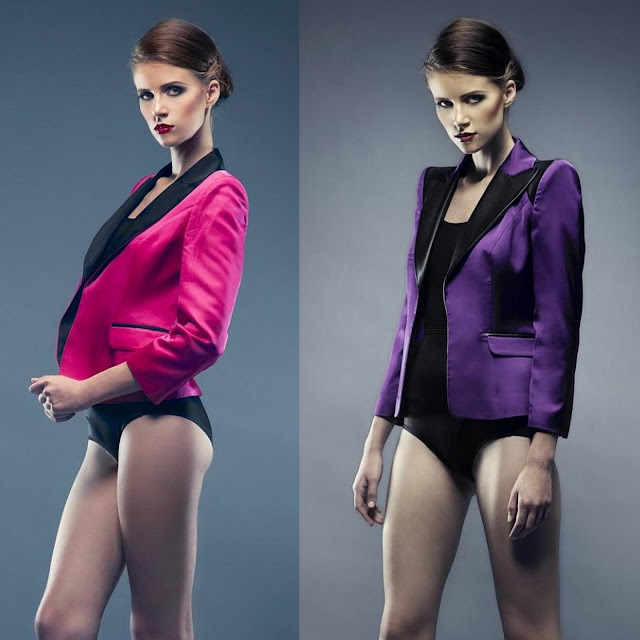 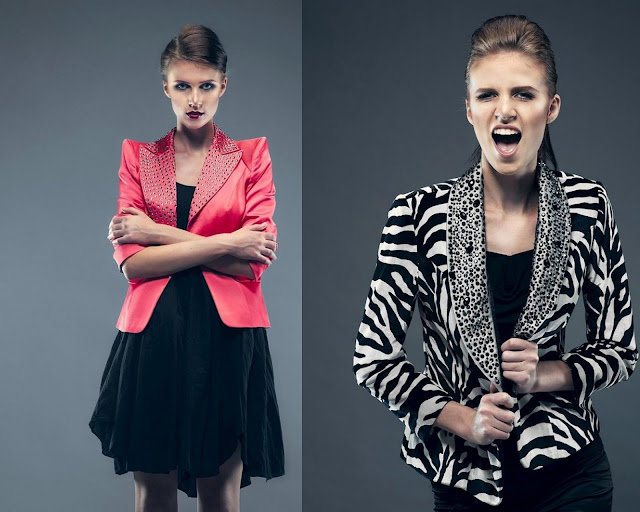 Get studded with Swarovski crystals in a vivid orange satin or velvet zebra print blazer.


You can view the full Mlle Epaulette collection on their website, where you will also find a Store locator. Prices range from $297 to around $457.
I have my eye on the pink satin and black sequined blazer, how about you?


*All images are copyrighted to Mlle Epaulette

Adorable jackets! All of them are so chic and unique!!!

The navy velvet blazer is absolutely perfect in every way! x

love the blue sequined blazer and the navy velvet blazer. the latter is a classic whereas the sequined one would be great for the coming holidays seasons!! :D

Well, I probably wouldn't rock a sequinned blazer with a bodysuit, but I love the idea of one with jeans and a plain white tee shirt! (It's just so hard to go out in polite society without pants.) I've been on the look out for a sharp shouldered blazer, I love the super structured looks like that and they look so sleek.

beautiful me plus you said...

I am crazy about blazers too at the moment :) love the pink and the coral one ! x Marina

I really like that items. I wore blazers too. Have a nice day.
http://www.fashiondenis.com/

blazers which fit well will turn a girl to a woman !! Great blazers love them !

Much love
Heiress
The Heiress Blog

Ooh I love all of them as a fanatic blazer collector although honestly, most are way out of my current price range. I'm not a fan of the gold one in color but I love the cut the almost cut-out approach to the silhouette. Would love to see that in a sleek black version.

I love those with sequins, the pink and the blue one.

Hi Sam! Oh wow I fell in love with all of these!! I also like this kind of jacket, my fav are the sequins and the velvet ones! Especially the black sequinned model is perfect for the New YEars' eve! Have a good day! Kisses my dear!!:***

Hi sweetie, these blazers are gorgeous! I love all the different colours, textures and prints. the navy one is especially chic! :)

Wow, they look so fantastic! Love that zebra style...and that dark blue in velvet I think! Lovely

There is nothing better than a blazer.. except for a sequin blazer :)

I vote for the navy velvet blazer, so chic!
Kisses.

I'd love a sequined blazer or two!

i looooove the sequined ones at the top! So festive and christmassy! Thank you for stopping by my blog ;)

YES!! Love these fitted blazers - the black sequins and metallic crocodile are make me swoo-oooo-ooooon!

Hope you're having a fantastic week Sam!

Hey Sam! Thanks so much for visiting Classy Ever After! You have a lovely blog here. I'm now following.

cute blog! I’ll follow you!
I have a fashion blog too, I hope u'll be one of my followers:-)
thanks:-)
VERONICA
http://www.givemefashionblog.com

Aaaakkk Sam! You just made me want to add more to my blazer collection! Woot! I love the satin pink & purple ones! Haha. Tux style! And the others too! OMG! I want more! :)

Thanks a lot dear, you too! I really think the same! Enjoy the evening, a big hug to you my friend!:***♥

WOW, they're all gorgeous ! I'm loving all the sparkly ones :)

Isabella | THE PILE OF STYLE said...

So inspiring! I must admit I envy you a little bit,your blog is really good, fresh and your ideas are fabulous! Keep it up, and please let me know what you think of my new post, it means a lot to me :)

I loooove the zebra one! It's my favourite ;) and sequined blazers are also definitely my weakness ;)

im so in love with these glitter ones <3
http://coeursdefoxes.blogspot.com/

Oh my goodness! Those sequined and velvet blazers are STUNNING!! I wish I had those in my closet.

WOW! this really takes me back to the 1980s when sleeves were puffy. I never thought we'd see these again. The sparkle is perfect for the holidays!

Such chic blazers. I love the sparkly ones ♥

My pick is the navy velvet...looks so rock and roll.

Your blog is lovely, and I thought your words in the post before this were fantastic :)

Oh all of these are amazing, want them all.=)

Wow! how gorgeous are these? My fav has to be the purple and black tuxedo style blazer.
TYSM for your lovely comments over at mine xx

the sparkly ones are so fun!

Amazing blazers, I want them all :D
xx
www.clothesandcamera.com

I like the first two. So glamourous and shiny!

Those blazers are so pretty! I adore the sparkly ones :)
-Tori
www.fashiontrendsmore.com

Those blazers are gorgeous!! I hope you're having a lovely day! xx

Such badass jackets for the badass vixen! This totally screams my style! Totally digging the two-toned tuxedo ones...fierce honey! Thanks for the hookup!

Also- I’m hosting a décor-to-dress giveaway where 3 winners will WIN a fabulous frock of their choice just in time for the holidays! Hope you’ll stop by to enter the contest!

These blazers are fab!

All these blazers are amazing! I especially love the sequin ones, it seems like it would be a really fun addition to a holiday outfit or can be dressed down with jeans or something. now this is really making me want to get a sequin blazer!

Sam, you find the nicest things I adore the sparkle blazers though I'm not sure I'd be able to wear them too often. The velvet zebra print blaze on the other hand - that pieces I can see being worn all year round!

These are all so gorgeous! I really love the first two

A's Fashion Files
Shop Kawaii Kitsch by A on Etsy!

Yes, this is definitely a staple! Love all the sequins and fun colours.

I'm looking for a plain black suit and a plain white suit - do you perhaps know where I could get one? :) I have other fun colours, but I'm needing the staples again. My ones have given up the ghost.
Hope you have an amazing day Sam! xxxx

Always so many interesting and fashionable things to see on your blog Sam. Looks like a great clothing line! I love the straight tuxedos!
Best Regards
Miss Margaret Cruzemark
http://margaretcruzemark.blogspot.com/

AWWW thank you so much for sweet words on my blog:) of course I follow you back:)

If you want to see a cool swedish webshop..check out my new post:)

have a great day dear

Good choice, Sam!!! Adorable jackets:) Thanks for sharing such a nice post! Also a very large 'thank you' for taking the time to leave a comment for me! I do appreciate that! BTW I'm following you right now, hope u can do same!
Have a happy time!

Oh I love these Sam - you have me desperately wanting a sequinned blazer now! xo

A litte bit back to internet... a friend of mine identified what went on with me, that I somehow have been bullied (harassed, in fact) by a freak I didn't want contact with... and that made me fear writing again!
I hope you are fine - I want the blue velvet blazer! Some years ago I was going to buy one, and opted for a black one. I regret till today! Now I was looking for some velvet burgundy blazers and got to see your post! I will visit the site you recommended, cause up to now I didn't find any blazer the way I liked!

I love the first two sparkly ones especially the blue - as you say, perfect for New Year's Eve - this brand is new to me.
http://missbbobochic.blogspot.co.uk/

Hard to pick just 1 favorite so...I like the blue velvet and the zebra with sequins on the lapel!

As an image consultant and personal shopper I love tailored high quality pieces. These jackets are perfect for many occasions (celebration, works, weekends...) Love the pink and blue sequined models!!
xoxo
Patricia

hey babe! so i wanted to comment earlier today from the office but got caught loool so i had to close all of my tabs of blogs and social media in embarrassment hehehehe
here i am , at the comfort of my home and doing what i like most particularly on your blog! :D
I was astonished to see one jacket in particular the metallic pink in crocodile , since we have a fashion designer here in Dubai called Lady Fozaza which she has the same jacket ! weird ! huh? check it out…. and let me know your thoughts. my though is a next post about the two jackets :) could it be a coincidence?
as for the rest i had and still have a huge love passion and lust for shrugged shoulders jackets! hence the result is LOOVE the post and content :)
xxx
nini

I love the navy velvet one!
XO, Gina

They're gorgeous and I want them all in every color.