The weekly roundup of celebrity style on and off the red carpet. 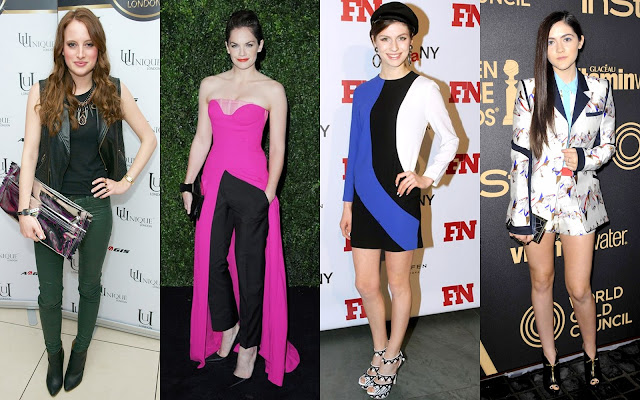 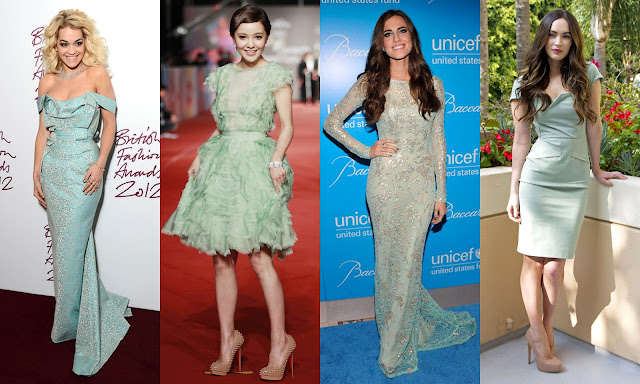 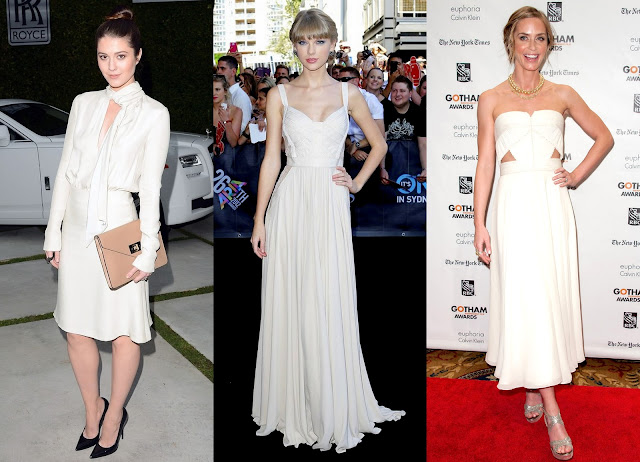 Glamour Across the Board 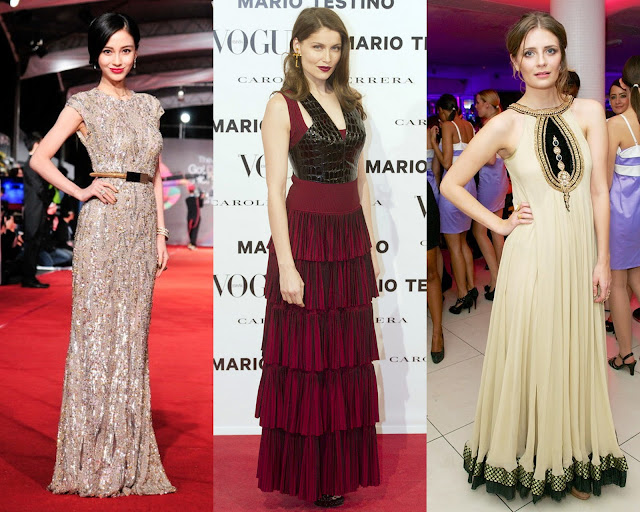 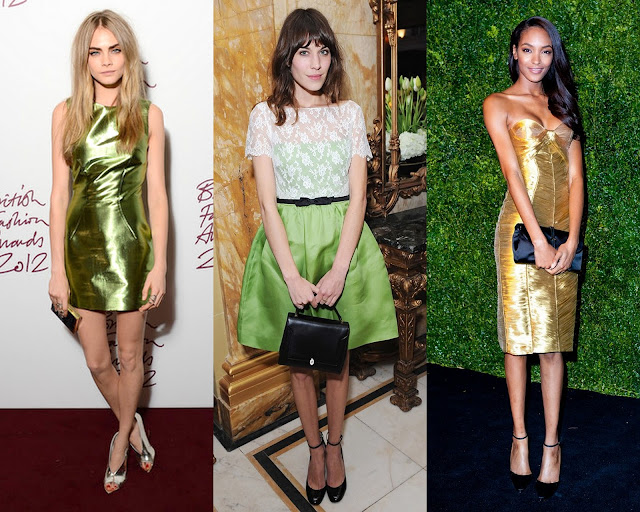 Cara Delevingne was named 'Model of the Year' at the British Fashion Awards this week, and dazzled at the event in a glossy moss green mini dress by Burberry Prorsum, along with modernistic silver metallic sandals.
Alexa Chung pays homage to Valentino in a girly apple green frock with lace overlay top, flaired satin skirt, ribbon-bow belt and all black accessories.
Jourdan Dunn was magnetic in a lustrous metallic gold Burberry bustier dress with textured woven detailing. Black ankle-strap heels and a matching clutch complete her luxe look.

kisses and hugs for you my dear:)

Hi Sam!! Happy December dear! My fav looks for this weekend are Taylor Swift with that white gown -wow!- and Cara Delevingne in metallic -she always rocks and made me smile! Have a great weekend! Big hugs!:***

I like this selection so much.
My favourite? Allison Williams's dress! It' s beautiful!

Love them all!
It is really difficult to pick a fave one!
xoxo

I do like Laetitia, you already know this, but i am so dissapointed at Emily Blunt cause blonde is not her thing..
Best Regards
Miss Margaret Cruzemark
http://margaretcruzemark.blogspot.com/

wauw, they're all beautiful women!

I think Cara Delevigne will have to win this time for me! That glossy green dress is just splendid!

Hi Sam, adore this weeks round up of looks! Love the styling of Ruth Wilson's look, very chic! And Cara Delevingne look AMAZING! :)

Rosie is definitely my favourite! ♥ that edgyness =)

I love every look and Alexa Chung just can't do any wrong, can she?
Hope you are having a lovely weekend and great Month dear!!!

I love the sea breeze and glamour looks :)
-Tori
www.fashiontrendsmore.com

I looooove Ruth Wilson, she has such a great red carpet style^^
x

These looks are all amazing!

LOVE THE LOOKS NUMBER
2 AND 4, AND ALEXA CHUNG LOOKS PRETTY FUNKY TOO!!!:))
XOXO

Love all the sea breeze looks, that color is great :)

That Ruth Wilson look is STUNNING...I'm always a total sucker for Dior. I think it makes any woman look instantly classic, feminine, and elegant...pluuuus it just turns every head in the room, what a stand out outfit!

Fab post!
My faves are
Isabelle Fuhrman (love her shorts)
Mary Elizabeth Winstead
Angelababy
and Cara Delevingne (but I don't like her shoes)

My favorite is Laetitia Castas outfit!

They all are so cute!♥

gorgeous looks. I LOVE megan fox's dress so much! Thanks for sharing =)

I think Taylor Swift looks gorgeous and Allison Williams dress is seriously beautiful <3 Thank you so much for your lovely comment - you are so sweet! <3
http://shopaholiconashoestring.wordpress.com/

LOVE the sea breeze photos, all so stunning <3

i loved your roundup!! the sea breeze was so pretty!

white dresses have always had this chic effect for me. they go well with different accessories and there are endless possibilities on styling them

have a nice day!

"Diaries of an Indistinctive Writer"

I looooove Cara's and Alexa's looks :) They are so amazing, I appreciate their styles so much!
xoxo

They're all gorgeous! The green color looks so great on Cara :)

My favourite is Megan Fox :)

Love this! I think Alison Williams dress is amazing -and also I'm surprised how gorgeous Taylor Swift looks in that gown - it is perfect!

I'm not a big Taylor Swift fan, but I really love her dress--it's so swan-like and angelic, super super pretty! And those green leather leggings are pretty rad, too. Nice picks! :)

Some really stunning looks. :) Especially Micha Barton, Taylor Swift.. Gorgeous women and dresses. And of course that first, edgy look by Rosie is cool too.

Thank you for your continuing support & visits at my blog, dear. Have a lovely Sunday.

All looks are fantastic! I liked the edgy ones, very different:) And Cara's stolen my heart again! This girl is soooooo beautiful

All these looks are stunning, but I think Megan Fox's is my fav, so ladylike :)
xo Jac
thesunshinedistrict.blogspot.com

I am in love with all the looks but the only one I can pull off in my every day life is the edgy one.
XO,
Zhanna
www.lifeandbows.com

wow I totally love all dresses!!

Wow! Great post! I love the edgy styling and sea breeze!!! Makes me wanna get more minty outfits too haha. :) Thanks Sam!


Have you joined my 1st Blog giveaway? (^_^)
Go and support and join me here!
#ChaiChenGiveaways (International)
Chai's December Birthday Bash - 1st Giveaway! <--click this!
Win shoes, clothing, and accessories worth around $88 from Asianvogue Shop, FlauntPH, and Bedazzle Accessories!

How amazing does Cara look? I know it's her job to look fantastic :) and this dress is such a stunner! I love it!

How are you, Sam? Hope you had a lovely weekend!

Love all the outfits!

Thank you for you sweet comment on my blog :)

Lolita in the Mix said...

All that dresses are so nice. Have a great day.
http://www.fashiondenis.com/

I love everything! the sea breeze gowns are amazing though :)

They are all fantastic! And I really like the gown Laetitia Casta is wearing - so original and lovely :)))

SHOP my closet! :)
Find out how YOU can be featured on my blog!

Great categorizing. You picked some great looks. Thank you for sharing. I appreciate your kind comment. I'm your newest follower on both GFC. Hope you'll do the same.

Thank you for your lovely comment on my blog. Really enjoyed this post! I think I like Allison Williams' dress the most, so chic and classic, she looks amazing.

These are all amazing looks, the edgy mix in the first line-up is my favorite.

love reading your "looks of the week" posts! Always full of amazing looks and inspirational ideas!
Have a fabulous week!

Loving all the looks except the edgy mixing...not my favorite.

I think the sea breeze picks were my favorite! I esp like megan fox's simple elegant outfit!

Adorable selection! I love the oversized jacket the most!!! So chic!!!

Wo-w, I have to say, that is truly an edgy mix with the hot print dress and the leather pants! (I would never think to do something like that, it takes a ton of daring to wear that out onto the red carpet and I gives her serious points for bravery.) Amber Kuo's dress however, is GORGEOUS. Oh, I would wear that beauty in a heartbeat, I love how full her skirt is. Once again, you always find the best celerity outfits!

I love the Sea Breeze looks! Very easy to the eyes :)