Following the frenzy of the hugely popular Leather Dress Trend, it was inevitable that a few celebrities would end up wearing the same one. In this case - 4 of them. The 'BLD' in question is a sleek bustier dress with sheer cut-out seams & flaired skirt by US luxury brand Kymerah. 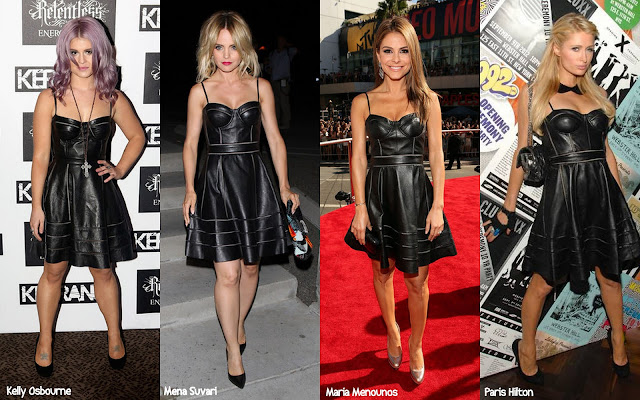 Kelly Osbourne was the first to debut the leather bustier dress on the red carpet 6 months ago. Kelly gave her look a rock chic edge with long cross pendent, black platform pumps and her signature lilac locks.
Mena Suvari gave the dress a breath of elegance on a night out in September. The 'American Pie' actress added a pair of pointy-toe pumps and a multi-hued Fendi bag to her look.
Maria Menounos picked out the same dress to wear at the MTV awards, just one day after Mena. The TV presenter was alluring in the structured corset fit and flair leather dress, pairing it with nude toned shoes and pin-straight hair.
Paris Hilton channelled her inner 'Madonna' at a fashion event in LA. The heiress styled her Kymerah 'Sora' dress with a collar necklace, fingerless black Karl Lagerfeld gloves, sparkly chain-handle bag and black Louboutin heels. 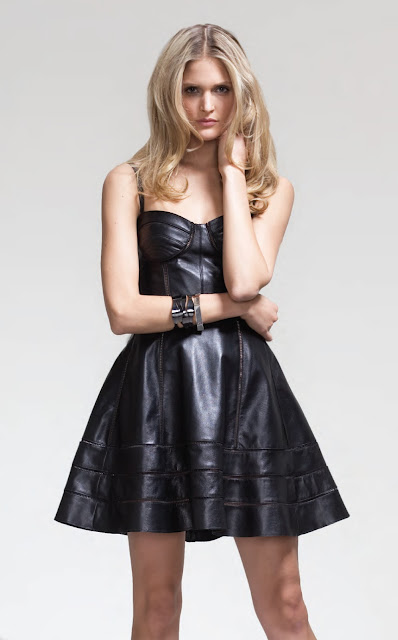 The uber sexy and chic Kymerah 'Sora' leather bustier dress is now
on sale via Shopbop, at the price of $766.50

Isn't it always curious seeing the same dress look so unique on different celebrities. I think Mena Suvari wore it best, the silhouette perfectly fits her petite frame and her tousled hairstyle and red hot lipstick gave it the edgy-glam styling needed.
What are your thoughts?


P.S. My apologies for late posts or comments - the techno gremlins have attacked my internet services.

I think all the girls look fabulous but I love how Mena wore it. Love how she paired it with red lips.

Hi Sam! Is a very cool dress! I think is hard to wear it perfectly and I totally agree with you, Mena Suvari wore it best and really the look suits her! Have a good day dear! hope your net troubles will be fixed soon! xo

We agree with you!! Mena looks fantastic in that BLD!
Thanks so much for your latest comment. That really meant alot to us!

The model who wore it on shopbop, bubif I had to choice then maria. Looks awful on the oter girls :)

Maria for the win! I like the sleek hair and the beige shoes are a nice twist.

For me that's definitely Maria!:)
Happy Wednesday my girl!!

Maria Menounos is my fave!

I love both Mena and Maria!

I agree with you Sam! Mena gave the dress the perfect bit of edge with her styling. It kind of needs the red lip.

Woow!!I love the leather dresses!
Thank you for the nice comment on my blog!

Maria looks absolutely stunning! She made it look so classy and fabulous!

What a gorgeous dress! I think Maria wore it best! Hugs from Cali! xx The Golden Girls

My pick is Maria! Doesn't look too bad trying hard with that dress. She looks sweet and fab! :)

Wow that dress is gorgeous! I love it and especially with it's beautiful fit and flare shape. I agree with your choice on who wore it best but I also do quite like Kelly Osbourne in the dress to, looks great with her hair colour, kinda quirky. Great post Sam :)

What a fierce dress! That's funny that Maria and Mena wore it after a day after each other. I think they both wore it best. Love that Maria wore nudes pumps with hers.

You know what, I really don't like her at all but I think I'm going to have to vote for Paris...apart from the gloves. Love the bag, heels and hair styling.

weirdly but paris hilton lol she kinda look like a dominator-ish!
xx
nini

Wow, this is a killer dress! All the ladies rocked it, but Mena is my fave. She looks perfect but I would have liked to see her with a straighter hair look :)

Okay this is going to be very strange for me to say this but I like Paris the best...did I just say that?
XO,
Zhanna
www.lifeandbows.com

On Mena it's better.
A little bit tired but I'm fine and happy because I just began a new adventure on youtube. And you??

I didn't really like the dress that much on any of them. So I guess I'm just not a fan of the dress.=)

I love Maria ! ;)
Egle by www.tobeaddictedtoshoes.com

Maria Menounos for sure :)
that dress is gorgeous.

thank you so much for your sweet words! your comment really made my day hihi:) i think blogging is such a nice way to connect with other girls around the world who shares the same interests - too bad you live so far away!

and to this post: i think maria looks best in this dress! i guess it's also because of her skintone which really matches the dress.
have a great day xx

Mena totally "wears" the dress !
I mean come on? it look awful on all other girls!

I have to say Maria Menounos!

I think Maria Menounos did! I love that dress! :)

All I know is, NOT Paris Hilton!

this is such a sexy dress! I think Mena wears it best. the dress was made for red lips!

Maria is my fave with Mena a close second. xA

Wow that dress is stunning! I think Kelly looks best in it! In my opinion shes the only one who really rocks it!

Nice ones! Agree with your choice Sam:)

I like it on Menouous...it's not overboard sexy and not too quirky. She just fits into it like it was made for her.

the dress is actually pretty hot!
PS. I am hosting 4 international giveaways with 0ver $600 worth prizes... so enter!
My Lyfe ; My Story
@MyLyfeMyStory

Maria Menounos - Definitely! She wore it simply, no crazy accessories and without the whole angry punk face!!

I like Mena Suvari's take on this look best - the dress with tousled hair and a red lip are very edgy/rock chick!

All looks great in that dress. Perfect style. Have a nice day.

LOve that dress!!! wish I could have one!!! xoxo

Wow, I think this is the first time I've seen Paris Hilton wear something and thought "whoa, she didn't screw it up with some weirdo styling!" (I actually like her little collar necklace, I can't believe I'm saying that!) Overall, I'll have to go with Kelly for wearing it the best, but that's most just because I love her and the purple hair is really fun. Overall, it seems like they all styled it pretty similar.

Definitely Mena, love the pop of color on the lips and the purse to really bring out the contrast with the black.

Hi dear! Glad to hear it! Hope you are having a nice day so far! Mine is okish! Kisses and hugs to you!!:***

i agree with u, mena suvari looks the best in that awesome leather dress :)

Lolita in the Mix said...

that's a great piece of dress. Paris rocked the look with the black collar ^^

I like it on Maria Menounous the best! That's a fantastic dress though!

Maria looks stunning in it! :)

Oh what a gorgeous dress! I wish I had it in my wardrobe...it's elegant yet edgy!I love it the most on Maria, she looks timeless and super sexy.

Hi Sam, this dress is beautiful! I love it on Mena Suvari! I don´t like it at all on Kelly and Paris,
kisses chris

Eleanor at Mirror Of My World said...

I think it's a toss up between Mena and Maria and for me, Maria just takes the crown! X

I've gotta say I think Kelly O did it the best! xo

I'm gonna go with Maria. I love how she styled it with nude pumps to soften the look a little
xo Jac
thesunshinedistrict.blogspot.com

Maria for sure! She's always stunning

Love the dress! I vote for Maria :)

the dress is really great and so groovy! I think it can fit everyone;)
Lovely post!!!
Have a happy time!

Think I like Maria Menudos styling best. The dress is absolutely gorgeous.

In my eyes Mena Suvari wore it best :)
xx
www.clothesandcamera.com