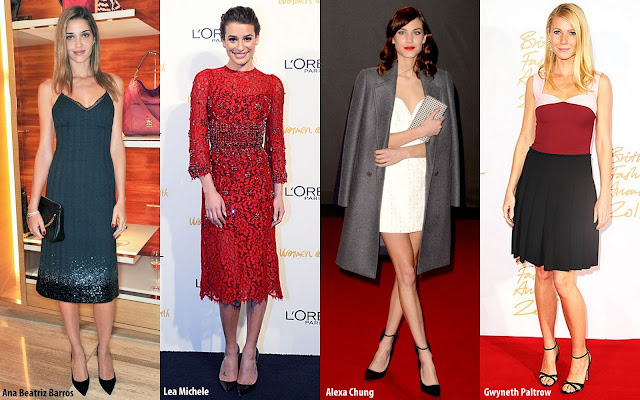 
Red Around the Edges 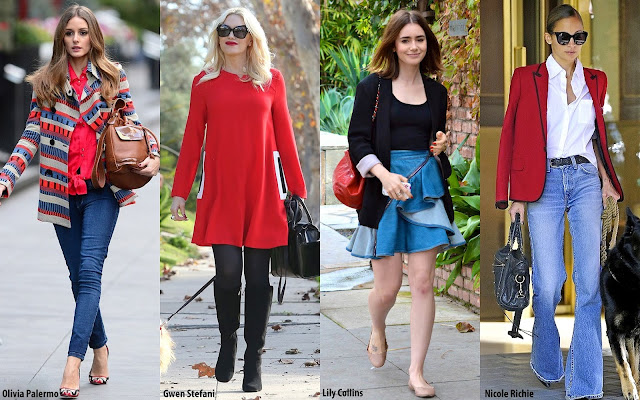 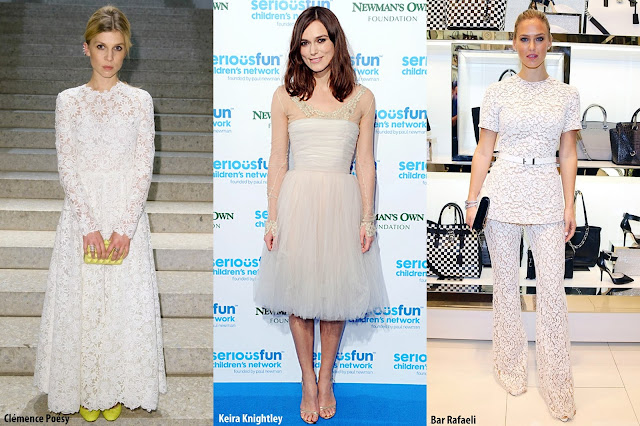 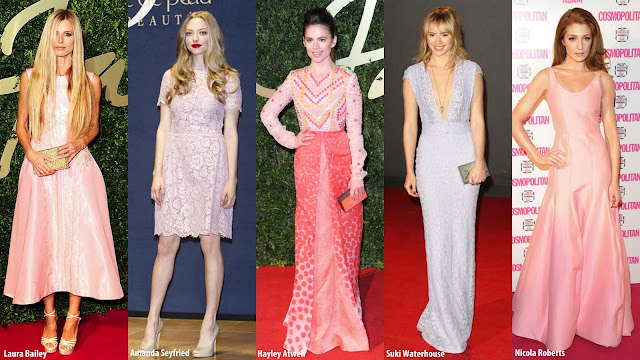 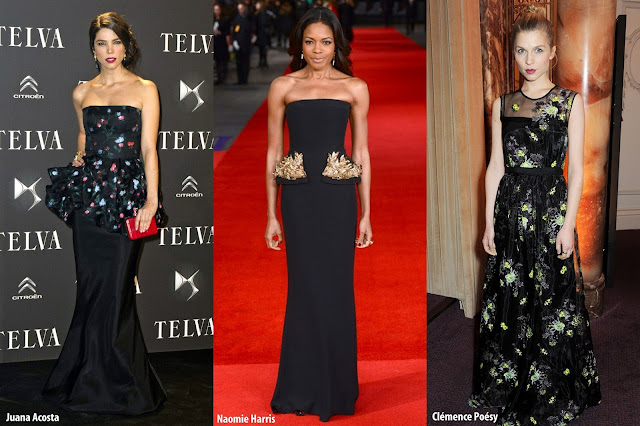 Juana Acosta charmed in this floral bubble peplum gown with mermaid skirt by Oscar de la Renta, adding a red clutch and lip for a pop of colour.
Naomie Harris exuded elegance in a strapless black Alexander McQueen gown with gold embroidered peplum, which is fit to perfection.
Clémence Poésy makes her second appearance this week in a beautiful yellow and black lace embroidered Erdem gown with sheer yoke. 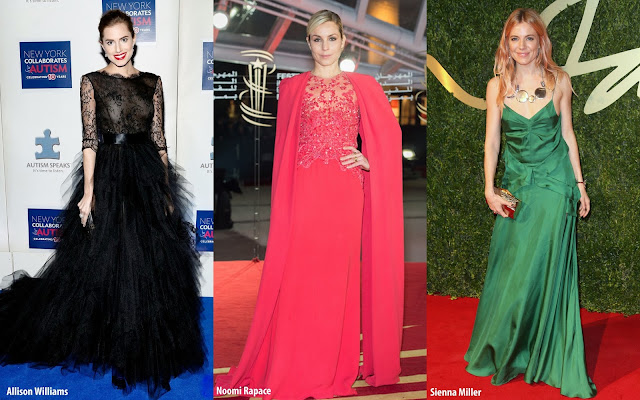 Who is your favourite 'Look of the Week'?

Hi there!
Your blog is Amazing!
My is just a simple one.

ooooh I just love the look by Alexa Chung! Why does she always have to look so gorgeous? :p It's so not fair!
And Olivia Palermo looks stunning, as well ;)
Haha, I always end up commenting about those two on your blog ;)

I think I'd have to go with Olivia Palermo, Nicole Richie and Allison Williams.
xoxoxo

My Lyfe ; My Story
@MyLyfeMyStory ♥ ♥

I love the cotton candy and the red accent outfits. They all look wonderful especially Olivia, whom I love.

Clemence is that Erdem gown is my fave. She looked sooooooo good!
Hope you have a good weekend ahead, Sam:)

The Red Around the Edges ladies know the perfect color to accent with!

So awesome!!
http://annluckindarkdays.blogspot.pt/
Giveaway on the blog* 4 winners 4 gifts!

Hello Sam, Gwyneth and Olivia looks so stylish as usual. They have natural style.

Wowie Sam, they are all very spectacular!!!
I can't seem to pick who is my favorite.
I really like Nicole Richie for some reason and Gwen is always fabulous:)

Thanks so much for sharing the inspiration

omg!!! lovvv red around the edges!

so many pretty looks to choose from. I think my favorites are the Dolce & Gabana worn by Lea, Alexander McQueen worn by Naomi Harris, & Oscar DE La Renta worn by Allison. Thanks for sharing dear. I hope you are enjoying your weekend!

So hard to choose one favorite but I really love Olivia Palermo's outfit.

Have a nice day!
vgolove1.blogspot.ru

i love the ones Alexa Chung and Gwen stefani are wearing!
cool post
have a lovely weekend,
S

% % % SALES have startes at http://www.sugarlanedesign.com/

Fab looks.... I love Olivia and Alexa, always over the top!!!!!!
Have a lovely saturday my dear, see you tomorrow!

Beautiful looks of the week! My favorite this time Laura Bailey. Pretty in pink. Wish you a wonderful weekend Sam!!

difficult to choose this time, love most of them

I am not a big fan of Gwyneth Paltrow, but she looks great in that photo. Her dress is fab.
www.minsbeautyequipment.com

The first selection is my favorite, red sparkling dress is to die for!

I like most Gwen's look, comfy, cozy, classy! :)
Have a great weekend.

I love Alexander McQueen 's dress, it is beyond perfection!

I guess no matter what Olivia Palermo is wearing I am loving it! I mean, how awesome is her outfit- I mean that tribal style stripped coat is amazing! I would so want to have it for myself! :)

Clémence Poésy's second dress is really, really pretty and flattering on her!

Have a great weekend,
-Kati

Morning Sam! Here my choices: Ana Beatriz Barros (she is so cute and I like her dress!); Alexa Chung (very stylish, love her coat!); Olivia Palermo (her look is so glam, love the colors matching); Gwen Stefani (drooling over the red dress!); Clemence (the Valentino gown is dreamy!); Keira (she is fab!); Amanda Seyfried (another to die for Valentino dress!). Have an amazing weekend my friend, many hugs! xo (ps thanks a bunch for your nice words, I just think the same of you!)

Like Ana Beatriz Barros, Gwen Stepani, Nicole Richie look amazing. No need to come over no new post today. Have a great weekend and thanks for your sweet comments all the time doll.
http://tifi11.blogspot.com

mmm cotton candy.
you always have the best collage of pictures!

Visit my blog: Labels and Lattes

Gwen Stefani, Nichole Richie, and Alexa Chung look amazing! I love their outfits and hope you have a good weekend my sweet fashion friend! ;)
xx Easy Outfits, by Pip

Wow! What can I say? ... intimidates me!
Great post! I congratulate the ability and talent to curiosity to me!
I will always be coming back for more: *

Love Alexa's look! Didn't even recognize her at first.

It must be Lea Michele and her embellished red dress! Thank you Sam for stopping by my blog, I hope you have had a great weekend so far!

Love all that reds:) Gorgeous looks!

Loving "Red around the Edges" for the season..

great selections, i love them all. I think alexa chung looks amazing!

Dear Sam, thanks again for collecting this wonderful looks! As I´m a huge fan of flare jeans this week it was easy for me to decide who got my award, it is Nicole Richie with here flared denims and the simple white shirt with the blazer. I must immediately check if I can copy this look :) Wish you a happy rest of the weekend!

Olivia Palermo is so stylish!

I love all the holiday looks. Gorgeous batch of looks :)

Mili from Call me, Maeby

Alexa Chung of course and Keira Knightley...Amazing that she wore her wedding dress!!! We go white this week... :)

There seems to be so much red around at the moment, as you would expect, as it's a rich festive colour. I like Nicola Roberts pretty pink dress which really suits her colouring. Enjoy the rest of your weekend, Sam. Once again, thank you for your regular visits to my blog and for your thoughtful comments.
http://missbbobochic.blogspot.co.uk/
http://missbbobochic.blogspot.co.uk/

Nicole Richie is hands down by far my favorite. She is killing it in that oufit and it is so refreshing to see how far she has come with her style. Lovely post as usual Sam.

Thanks for you sweet comment on my blog. Always a pleasure to have you.

Is December for that reason my fav this time is Red Around the Edges.
xx

I want invite you to Join to my SammyDress Christmas Giveaway! For win a Dress, Cardigan or

Olivia Palermo has a perfect style with this fabulous jacket ! Alexa and Kiera are very cute too :)

I love Bar Rafaeli's outfit!
Have a nice weekend Sam!
Thank you for all the beautiful comments!

Laura Bailey looks lovely, but I think I am heavily influenced by her wonderful hair!

I was honestly just mesmerized by so many of these looks!! Such a beautiful round up :)

amazing post!
I loved the pictures where Miranda and Lily wear Red!

Oh my this looks are so fabulous. I like OP and AW. Happy weekend.

Love all these styles! I wish I had Olivia's style too. She's so inspiring!

Ugh, I just love these posts you do. So thorough and so much to look at and take in. I always try to pick just one outfit I REALLLY love and can never narrow it down to three much less one! I am a huge fan of Lea Michele's fashion. She isn't really too well known for it but I think that is what I like about it-- its not too much to where it is show stopping but it is also not boring and rundown. She dresses very age appropriate, and very together, yet very attractive while doing it.

Thanks for sharing, keep doing these posts as they are my absolute favorite from you!!

We fell in love with the look of Gwen Stefani some days ago! We are thinking about showing it in one of our section! :)
Kisses
Francy&Stef
Chic With The Least
Also on Facebook and on Bloglovin’

Not sure my previous comment was recorded... Vanilla Mist and Cotton Candy are my faves!

Just let me know and I will make sure to follow ya back
http://beauty-fulll.blogspot.com/2013/12/celeb-style-accessories-by-choies.html

beautiful! my fav is the one on Allison Williams! that is one gorgeous dress. xx. gigi. www.gigikkitchen.com

On your previous post, I hadn't realised you are from S Africa. I'm saddened by Nelson Mandela's passing too. He is such a great inspiration. If only the world would look up to him as an example, there would be so much more peace.

Beautiful! i´m in love with all the red Outfits and Dresses!

It's such a delight to see Gwen after a long time.
As always, great post :)

I love how Keira has reworked that dress for her wedding, and at least two other events! Amazing, although us non-celebrities often rewear our clothing, even my formal dresses might only get one wear. Love Alexa as well, so chic! xx

Beautiful set, love the third one!

I love the Olivia Palermo style, she is stylish and trendy... Also the outfit of Nicole Richie its awe!
xoxo lady!

So many beautiful looks!!!

So many great outfits.

Love the coat of Olivia Palermo :)

I'm in love with like every look you posted!!!
xo Jessica
www.NewlyLoved.com

wonderful inspiration! Olivia is my winner, i just love her style!
have a great new week sweety!

Hi dear Sam, thanks a lot for your lovely comment - I wish you a happy new week!

Red has never been a color I have purchased often but I have been loving it lately. That blazer on Nicole Richie is beautiful.

i'm in love with gwen stefanis style. and clémence poisy looks very pretty in her dress. nice looks of the week indeed! thanks for your lovely comment! i'm glad you liked my paris pics.

Hi Sam! how are you? hope you had a good week.
I just love your weekly recaps:)
Olivia is my absolute favorite! also love alexa & lea's looks:)

have a great start to the week!
lots of love xx

Hello Sam!
I like a Keira Knightly, so feminine and sweet, want a drees like this :)
Have a nice startweek!

They are all really beautiful looks!!!! I have to say that I felt in love with Nicole Richie jacket.
Kisses darling

I am loving that Alexa Chung look....she is flawless and so elegant

I'm drooling over Alexa Chung's look - especially those shoes! I think they are Kate Spade - or at least I saw some similar Kate Spade's recently that I wanted badly to buy. Also loving Nicole Richie's style here - always impeccable!

naomie looked stellar in that alexander mcqueen. i love the black with gold embellishments.
http://www.averysweetblog.com/

All of the dresses and outfits look so great (: x good inspiration.

like the looks very much, especially the street looks :))))

Sam, My favs on this would be Ana Barros and Naomi Harris, so gorgeous and natural looking!
XX, Elle
http://mydailycostume.com/2013/12/amazing-shopping-tip-shopping-fifteen-dollar-store-com/

I like Lea Michele's dress, when else could you wear it so perfectly?! :D

I love Olivia Palermo, she look incredible here. This girl always gets it right. Big fan of her style :)

The coat worn by Olivia Palermi is Natan ,the sama fabric is seen on Queen mathilde of the belgians