Waking up to a world covered in pristine white ice was a truly magical experience. The icy dusting on our little town brought with it a hamper of joy and excitement. Not only because schools and offices were all closed. Snow in South Africa is a rare occurrence, so when it happens, it's pretty much like Christmas in July.

Cheery snowmen dressed in bright wooly scarves graced almost every garden. Parents enjoyed a day off, while children's laughter and snowflakes filled the air. This was the heaviest snowfall I've ever seen, it was more than 20cm deep. People had to shovel their way out of their driveways. Trees had fallen down due the sheer weight of the snow. Roads were closed to and out of the town, meaning that while we reveled in our snowcapped bliss, many travelers and truck drivers were stranded. A few good samaritans spent their day providing them with warm food and shelter. 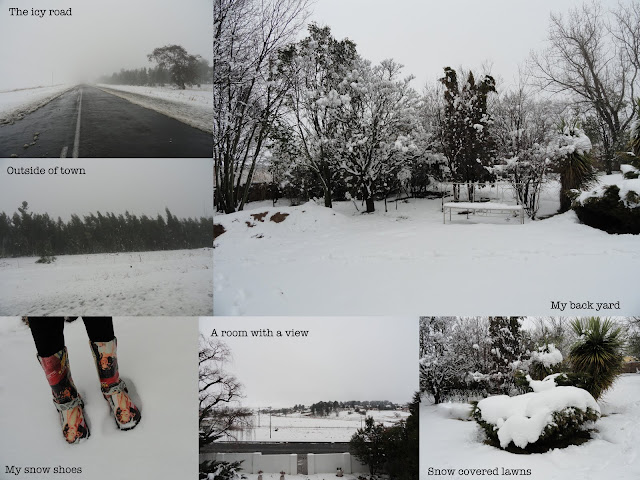 These are some photos I took during the day. We drove around for a short while, but soon discovered that the roads were too slippery and treacherous. So we settled for buttered popcorn and a steaming pot of coffee in front of the fireplace instead. As gently as the snow drizzled it's magic upon us, it began to melt. By tomorrow morning all we will be left with are the sludgy remnants of an enchanting snow day that too swiftly passed.
Posted by Sam

WOW!!!! That's unbelievable, in SA. Hope you had fun in the snow.

It hasn't snowed this much in more than ten years. It was really lovely.