I took some photographs of my mini-break while I was away last week, so I could share the splendor of the South African East Coast with you. 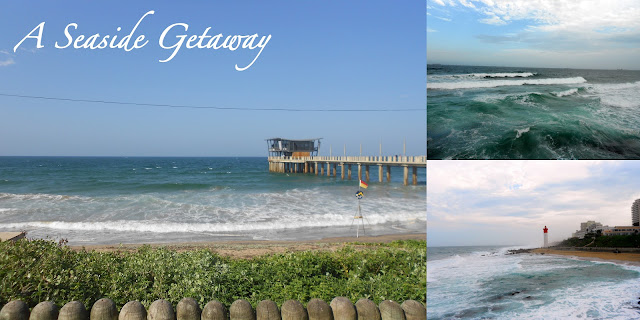 I spent the week at the coastal resort village of Umhlanga, which is a stone's throw away from the city of Durban on SA's eastern coastline. I'd like to say we stayed 'on the beach', but according to dodgy internet bookings, that means behind the hotel that's 'on the beach'. The weather treated us a little too well, it was tremendously hot at over 30 degrees Celsius everyday. Above left is a picture of North Beach, where you can dine at Moyo restaurant right at the edge of the pier. Bottom right is a view of the Umhlanga Lighthouse, set alongside the beautiful blue sea, shadowed by five star hotels and ocean view apartments. If you're going to retire in style, this is the place to do it. 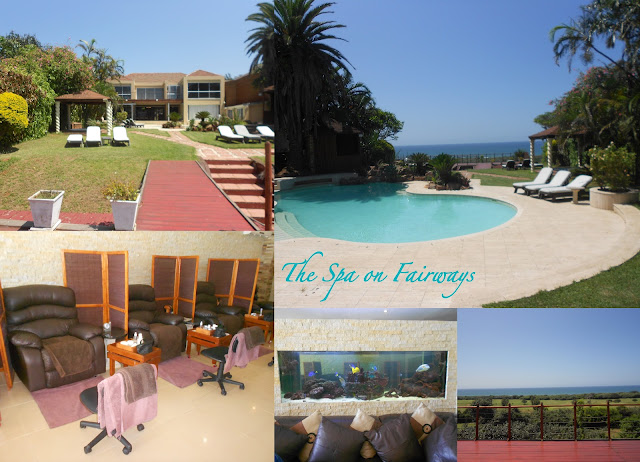 I made a little trip to the Spa on Fairways while I was there. They offer the most luxurious pedicures in serene surroundings. Once you get on one of those comfy leather couches with a cup of coffee and good conversation, it's really hard to leave! With more time, you can enjoy use of the pool and outdoor jacuzzi on the deck, which provide a panoramic view of the lush green Beachwood Golf Course and azure ocean. Utter Bliss!

Being an animal lover, I visited the uShaka Sea World, which is the largest marine habitat in the Southern Hemisphere. We saw the most astounding and incredible sea creatures, including many different types of sharks, which, if you're brave enough, you can say "Hi" to one during a shark-cage dive. Sea World also houses seals, penguins and a large variety of fish, some native to SA and others from international waters. I also got to see the dolphins up close during a show. I now realise how magnificent and intelligent these lovable mammals are. 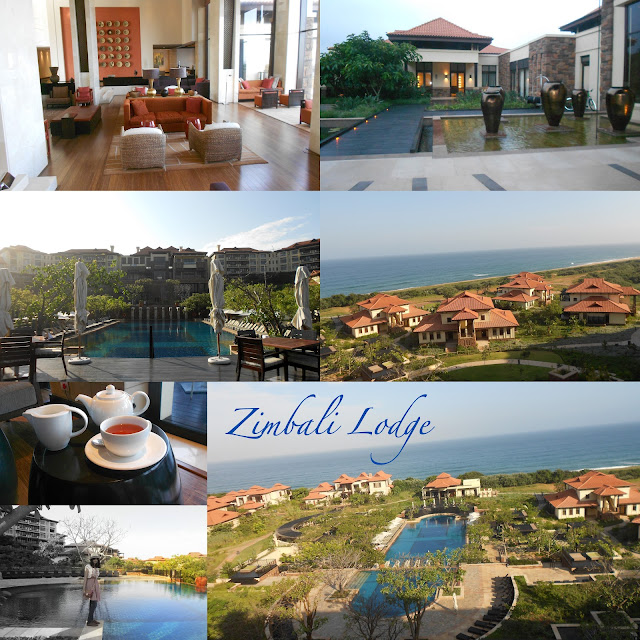 My dearest friend from Dbn, Ms M, kindly took some time off work to take me around the best spots in her city. One of them was the glorious Zimbali Lodge and Fairmont Hotel, which is set atop a hill that overlooks the picturesque Indian Ocean. We drove 30km out of the city for an indulgent afternoon tea, where I tried out one of the in-house blends called 'Safari Chai', along with scones and cream. How very 'English' of us. That is a very rare black & white picture you will see of me standing at the infinity pool. These heavenly views come at a price, to stay the night at one of the Indonesian style houses costs around $330.
That was a little snippet of my seaside getaway, as good as it was...it's great to be back.

*All photos by me. Special Thanks to Ms & Mr M for taking me around their city and for the royal treatment!
Posted by Sam

I have a good friend from South Africa originally and he always talks about how beautiful it is there! It's currently raining/snowing outside (just really gross slush actually), my trip to Maui could not come sooner!

Your vacay pictures are beautiful! I LOVE Sea World and would love to go to uShaka Sea World! I've been to the Sea World in Florida! I LOVE your Sea World pics by the way! :) Your Seaside Getaway pics look SO beautiful and amazing! :) I LOVE those pics and the lodge looks beautiful! You are SO lucky to get to travel so much! :)
LB
x0x0x0x

What a teaser! I loved the pics of your journey, I bet it was a wonderful time. I'm happy you're back though!

Thank you for sharing excellent informations. Your website is very cool. I am impressed by the details that you have on this web site. It reveals how nicely you perceive this subject. Bookmarked this website page, will come back for extra articles.

Utter bliss is right! These pics are divine. I want to go somewhere! LOL
http://www.averysweetblog.com/

Love the pics, looked so beautiful. :)

this blog full with inspiring pictures!!
heart you <3

Oh wow this pictures of where you stayed are amazing honey!!! It looks soooo beautiful and sounds like you had such lovely time! Thank you my dear for sharing this stunning pictures with us :)

What an amazing place! I know I was on the beach just 2 weeks ago and at the time I said "can't wait to go to the UK", but I don't know, I feel a bit dumb to say I would love to be at this resort now! Hahaha! I change my mind sometimes! Well, anyway, it's because it looks and certainly is so luxurious! I want the pedicure you talked about!
I hope you enjoyed a lot and I loved the pool picture!

Wow you've been so lucky! :) It looks so beautiful! You sure had a lot of fun. That's awesome!

Ooooh wow it looks amazing, hope you had a great time darling!

my boss goes there often and it looks so beautiful.

every time i visit blogs i'm always seeing such awesome photos of the places they travel to, and these pics of South Africa take the cake! so beautiful!

Wow it looks so beautiful there, it looks like you had a wonderful time!

Such beautiful photos! I would trade you my weather for yours any day! ;)

~so sweet of you to share your getaway with us, so many gorgeous places and beautiful things.
The biggest treat was to see a pic of you, even if it is really tiny!
Hope you are enjoying your weekend hun.

No problem at all for the comments beautiful! I found them love and commented on them! :)
LB
x0x0x0x

Dearest Sam u killed me with this post!:( I need some sun, I'm moving there! Can I stay at your place for the beginning?:D Beautiful pics, it's a paradise!!!!!
kisses

Very beautiful photos! This makes me wish for a pretty vacation! :)
Good luck!

Oh, it looks divinely relaxing and so beautiful... I've only been in NYC in the cold for a week and a half here but your photos are making me miss warm sunshine and beaches!

ps. am glad you're back!

I'm so glad you posted photos from your getaway, it looks gorgeous Sam. And Chai with scones and cream? I Do! I Do! I Do! Maybe when I visit, we can stay a night at those Indonesian styles houses. Or we can meet in Bali and get the real deal! <3